Rumbling Volcanoes in Indonesia and Vanuatu Still Have People Worried 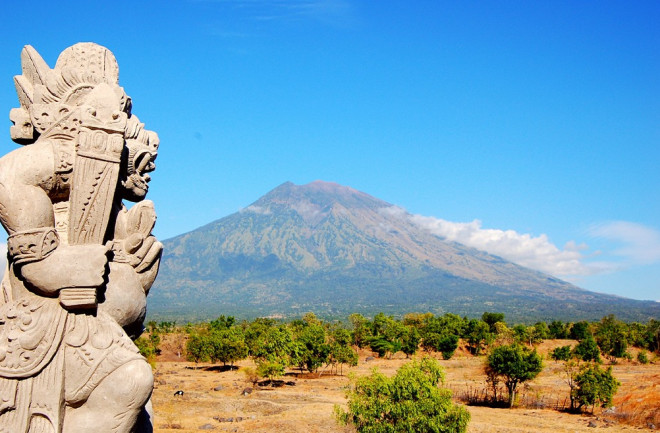 Agung in Indonesia seen in 2009. Antoine Vasse Nicolas / CC by 2.0 This week, the focus is on the rumbling volcanoes in Indonesia and Vanuatu. Here are some updates (along with a tidbit at the end on Washington's Rainier.) Agung The unrest at Indonesia's Agung continues and now the total evacuated has reached almost 100,000 people. Now, this volcanic crisis has been going for almost a week with no eruption ... and we begin to enter the long, dark teatime of volcano monitoring: how long until people stop believing your statement's about an impending eruption? What if Agung waits 3 months to erupt instead of 2 days? Credibility is very hard to rebuild after a false start, so I'm sure Indonesian volcanologists and officials are biting their nails as Agung keeps experiencing heightened seismicity. Comparisons of satellite images of Agung taken in early and late September (below) show the changes in fumaroles (gas emissions) from the volcano as it became more restless.

and more are being felt, so they're also getting stronger. All of this still supports the idea that magma is nearing the surface, making the likelihood of an eruption high (even though the steam plume is slightly smaller today). However, as any volcanologist would tell you, you trying to not only figure out the "when" but also the "how big", and the latter is definitely much harder. Indonesia officials are making plans to divert flights if/when the eruption begins

and some airlines are planning to make extra fuel stops in case they have to turn back due to an eruption. Even without an eruption, the aviation alert level for Agung was raised

to orange (from yellow) yesterday. Many people are making the evacuation

on foot with the official exclusion zone around the volcano is currently set at 12 kilometers. Also, many countries are issuing travel warnings

for people going to Bali because of the high potential of an eruption. If you're looking for lots of information and updates on the situation at Agung, check out Dr. Janine Krippner's posts

. Ambae In Vanuatu, the evacuations near Manaro Voui (Aoba)

are continuing, with the government of Vanuatu pledging $2 million

to help with the preparations and evacuations. Ships have arrived with supplies

for the evacuees, including water, food and essentials -- however, more supplies are needed

which are rapidly becoming overcrowded

. An official state of emergency has been announced

for Ambae as well. An overflight of the volcano's summit

, which warns of the potential of volcanic bombs being thrown over 6 kilometers from the summit vent.

NEWS || Our highly trained Orion crew has surveyed volcano activity in the Sth Pacific. NZDF is pleased to help the Vanuatu Gvt.#Force4Goodpic.twitter.com/SyW5HK8iZ2

Rainier On the far other end of the spectrum of concern, Washington's Mt. Rainier

experienced a small earthquake swarm over the past few weeks

. You can read the full USGS statement

on this earthquake swarm that can be summed up as "no indication that an eruption is in the works at the volcano". This swarm might be related to the hydrothermal system under the volcano, where water warmed by magma deep below the surface circulates. Now, I bring this up not to scare people but rather to remind that the lower 48 states have potentially active volcanoes, including Rainier

, lurking near Seattle You can check out the seismicity at Rainier on the PNSN page

. The last known eruption of Rainier was likely in 1894.