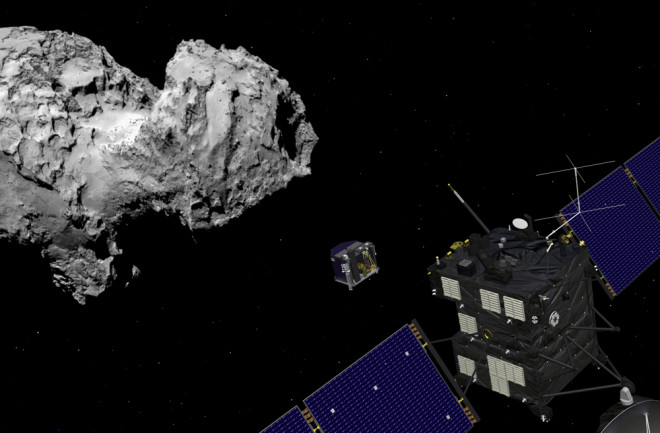 An illustration of the Rosetta orbiter launching its Philae lander onto Comet 67P/Churyumov-Gerasimenko. (Credit: ESA/Rosetta/MPS for OSIRIS Team MPS/UPD/LAM/IAA/SSO/INTA/UPM/DASP/IDA)

On Aug. 6, the European Space Agency’s Rosetta spacecraft went where no man, or probe, had gone before: into orbit around a comet. The rendezvous marked the end of a 4 billion-mile journey and the start of a 17-month orbital mission designed to understand the changes comets undergo as they approach the sun.

Because comets contain material from when the sun and planets formed, Rosetta can answer questions about the evolution of the solar system and the origin of water (and possibly life) on Earth.

Just weeks after arriving near Comet 67P/Churyumov-Gerasimenko, Rosetta delivered the sharpest-ever views of a nucleus — the frozen mass of rock and ice at a comet’s heart. The spacecraft’s camera revealed it as a double-lobed object that some mission scientists referred to as a “rubber ducky,” complete with a head, neck and body. Pocked with craters and littered with boulders, the nucleus measures about 2.5 miles across at its widest.

As of press time, Rosetta is scheduled to drop a lander, named Philae, in mid-November onto a site on the comet’s surface named Agilkia — another space exploration first. Together, the two spacecraft will map the comet’s surface, analyze its chemical composition and study the gases and dust particles ejected as the sun’s heat warms the ice in the nucleus. Philae should survive for a few months, and Rosetta will last until the end of 2015 or beyond, so the probes will be able to examine changes in 67P as it heads toward its closest approach to the sun in August.

Read updates that occurred after this issue went to press here.