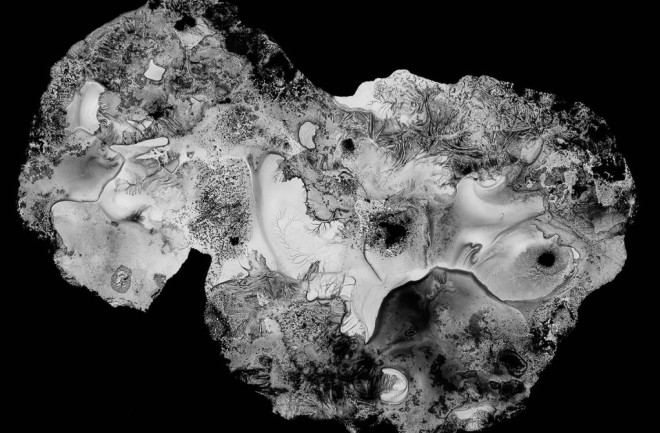 Artist Bernd Nicolaisen made this 3D relief of Comet 67P based on Rosetta data. (Credit: Bernd Nicolaisen based on images taken by the Rosetta/OSIRIS cameras,© ESA/Rosetta/MPS for OSIRIS Team MPS/UPD/LAM/IAA/SSO/INTA/UPM/DASP/IDA) When the European Space Agency's Rosetta spacecraft arrived at Comet 67P/Churyumov–Gerasimenko in 2014, it revealed a surprising "rubber ducky" shape. Now researchers have combined thousands of images to present the most accurate three-dimensional model of the comet, mapping the minute features down to just a few feet. "For us, the three-dimensional shape model has been the starting point," Nicolas Thomas, a professor at the University of Bern and project coordinator of the Multi-instrument Analysis of Rosetta Data (MiARD), said by email. "We had to have that done before other work could be done." MiARD spent 30 months combining the vast amount of information returned by several of the Rosetta instruments. That model allowed the team to create an improved map of 67P and identify many new terrains on its surface, as well as estimate the comet's strength. Comets are remnants of the earliest days of our solar system, so this information could improve our understanding of our cosmic origins. But it would also prove helpful should humans attempt to wrangle or divert comets. The model also helped the team estimate the comet's strength, better understand how it's losing mass as it nears the sun, and improve predictions about the orbits of cometary dust. Researchers presented the results, models and an artistic project on Thursday.

Rosetta arrived at Comet 67P on August 6, 2014. After more than two years of orbiting and observing the outer solar system visitor, it sent its last signal home on September 30, 2016 ,as it made a controlled crash on the comet. That's where MiARD stepped in. Between March 2016 and August 2018, the project sought to combine complementary datasets from the spacecraft to create and test multiple models. The 3D shape model was the first step. According to Sharp, the extended time allowed project researchers at the DLR institute in Berlin to spend additional time combing through the Rosetta data to create a model with accuracy down to just a few feet. "I think the global 3D shape is now definitive," Sharp said. Creating such a detailed model was a challenge. Not all of the instruments on the spacecraft operated at the same time, and Rosetta itself wasn't always near the comet's nucleus. That made it important to select only the best observations. After combining approximately 10,000 images, the largest models weigh in at over 600 megabytes and contain over 12 million facets. With the detailed map in place, the team studied the sun-driven activity of the comet. The sun's heat causes ice on or just beneath the surface to jump from solid to gas in a process known as sublimation. Sublimation affects the comet's outgassing, dust production and erosion rate. And the dust brought its own challenges. The team calculated how fast the comet shed larger dust particles, which Thomas said many scientists expected to dominate. However, Rosetta's GIADA instrument could only measure those large particles, revealing very little information on the smaller dust pieces. "That has proved to be a major source of argument and uncertainty," Thomas said. The new model also helped the team better understand changes in 67P's spinning nucleus. As gas and dust flow off the comet, they push against the surface, changing both the comet's spin and its orbit. The MiARD team used their model to predict the current location of 67P today, and they are waiting for Doppler measurements to confirm it.

(Credit: ESA/Rosetta/MPS for OSIRIS Team MPS/UPD/LAM/IAA/SSO/INTA/UPM/DASP/IDA) Thomas hopes that the results compiled by his team will not only help to improve understanding of comets but will also help to prepare for the next mission to an inner solar system interloper. "One thing that is really clear is that Rosetta was not able to provide certain observations," he said. He cited the lack of a thermal-infrared mapper instrument, which could map temperature changes across the comet and study emitted heat, as one such loss. "But we also see that other measurements are really vital if you are to model and understand active processes on cometary nuclei," he said. MiARD researchers are now working on a research paper about what questions Rosetta answered and what it failed to resolve. These insights could make an important impact on proposed comet missions. "I personally don't believe that one mission can answer everything, but I hope the work will provide impetus for a new mission," Thomas said. "Our project demonstrated that we still have a lot to learn."