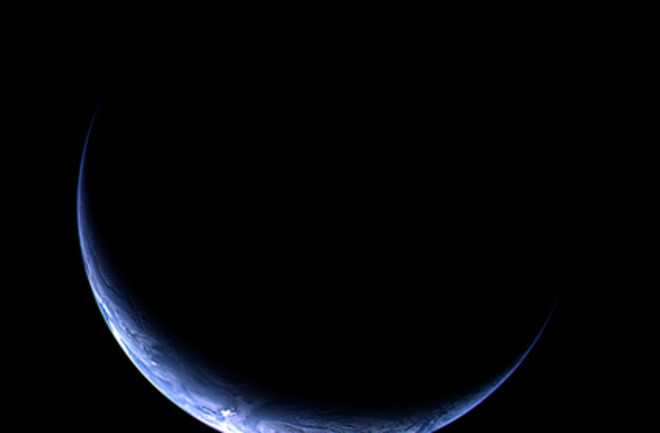 This dazzling picture of our planet, all dark but the cerulean sliver of the South Pole, was a long time coming. Rosetta, a European Space Agency craft, captured this view of the crescent Earth from about 400,000 miles away.

The unmanned probe, which is busy chasing comets, was making its third flypast since it was launched in 2004. The close approach gave it a speed boost to send it on its mission to Comet Churyumov-Gerasimenko [Scientific American]

. This will be Rosetta's final visit to its home planet, having already executed a flyby of the asteroid Steins, a gravity assist with Mars, and two previous swoops past the Earth, gathering images all the way. Now it's off to the comet.

Rosetta is carrying a fridge-sized lab, Philae, that it will send down to the comet. Anchored by tiny hooks, Philae will look for clues about the Solar System's primal past, exploring a theory that comets are primitive rubble left over from the making of the Solar System [AFP]

. While we bid safe travels to Rosetta, it could tell us something about the Earth itself on this final pass. Scientists notice unexpected behavior in spacecraft that make gravitational assists with our planet: Rosetta itself behaved exactly as expected in 2007 flyby but picked up an extra speed boost of 1.8 millimeters per second on its initial maneuver in 2005, leading some mission scientists to speculate that the Earth's rotation might be distorting space-time more than they thought.

"Some studies have looked for answers in new interpretations of current physics. If this proves correct, it would be absolutely groundbreaking news" [MSNBC],