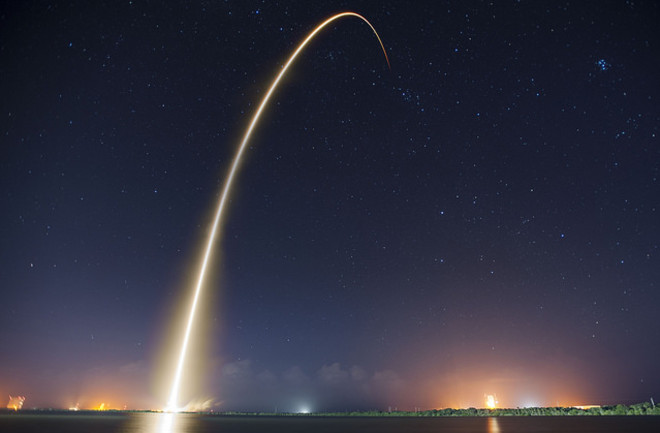 A night launch for SpaceX's Falcon 9 rocket. (Image: Flickr/SpaceX) Launching rockets into space has traditionally been the domain of nation states: only a handful of countries over the last several decades have mounted the technical expertise and financial resources to put payloads in orbit. With so few players, outer space was governed by the “Cold War principles” outlined in the Outer Space Treaty of 1967, which holds nation states accountable and reserves the use of space for scientific study and other peaceful purposes. Today, space law needs an overhaul, according to James Gilley, an Instructor of International Studies at Louisiana State University. After all, some of the key assumptions that underlie the Outer Space Treaty no longer apply. A wide range of entities, from treaty non-signatories to private companies like SpaceX and Blue Origin, are charging into low Earth orbit and beyond, and their intentions are unlikely to be restricted to scientific research. “We’ve kind of forgotten as an international community that we’ve written laws about this stuff,” says Gilley, “because nothing has truly upset the apple cart.” But that could change soon, and Gilley points to a few plausible cases where rogue actors could set off an international legal crisis. The first possibility involves non-signatory state actors – there are roughly 70 – establishing a presence in space and pursuing illicit activities. Chances of this scenario playing out are relatively low, since most of the potential nations lack launch capabilities and even traditional rabble rousers like North Korea have actually signed the treaty. Another option is the “flag of convenience” scenario, under which private corporations base their operations in non-signatory countries – likely small developed nations – to avoid the constrictions of the treaty. But the most likely rogue actors, according to Gilley, are private companies operating within countires – like the United States – that have signed the treaty. To date, private launches have been assumed to operate under the legal auspices of the launch site country. If a SpaceX rocket launched from Florida were to disintigrate and cause damage in Europe, for example, the U.S. would be held responsible. But this cozy agreement between corporations and home countries could change, particularly if a company rejects the regulatory framework of its home nation, or is seen to be reckless. Economic considerations could also challenge the status quo. “If someone goes out and starts mining asteroids,” explains Gilley, “this could collapse resource markets” and countries with strong financial dependence on natural resources could stage a legal revolt. As for a fourth rogue actor scenario – of private companies launching from international waters – well, “we haven’t written laws on that,” says Gilley. “But it’s going to happen, and we need to clarify what’s going on.” This prognosticating may seem academic for the time being, but given the magnitude of the issues at stake – weaponization of space, accidents involving nuclear propulsion, or the reconfiguration of global markets – it’s best to be proactive. And these kinds of large, international treaties don’t change overnight. The United Nations Law of the Sea took 15 years to modify, Gilley notes, “so we might not have the time to revise this before it becomes a very important issue.” Gilley doesn’t have a new draft ready to go; he’s mostly interested in starting the discussion. “I think you still need to include a voice for traditional nation states,” he says, “and balance it with private entities, while including average citizens as well.”