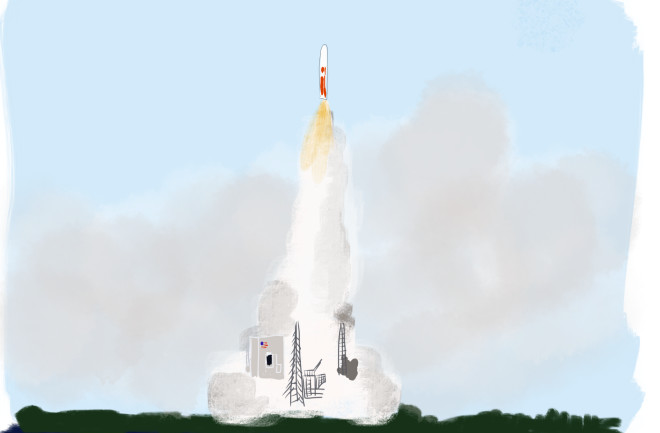 Jeff Bezos, founder of Amazon, is on a mission to retrieve the Saturn V rocket stages and engines from a watery “sculpture garden,” as he calls it, at the bottom of the sea off the coast of Florida. In a blog post on March 20th he announced that the endeavor to bring some of the F1 engines from Saturn up to the surface has been successful.

The size of small office buildings, the Saturn V moon rockets are the most powerful rockets ever to have flown. When tested, their engines shattered the windows of nearby houses. To date, the Saturn Vs are the only launch vehicles to have transported human beings beyond the low Earth orbit.

There are “stages,” types of engines of varying power, attached to rockets that help launch them into space. When the Saturn V moon rockets blasted off Cape Canaveral between 1967 and 1973, they flew east over the Atlantic Ocean. The Saturn rockets were made up of three stages, and when the first had used up all its fuel, about 2.5 minutes into the flight, it was jettisoned and chucked into the ocean, re-entering orbit at 5,000 miles an hour and impacting the ocean surface at a damaging pace, so as not to crash land and harm any humans.

The crew, which Bezos refers to as the A-Team, included recovery experts, underwater archaeologists, sonar experts, remote operated vehicle (ROV) technicians, and Irish diver Rory Golden, who found the main ship’s wheel of the Titanic back in 2000. The team used NASA’s flight records to estimate where the engines would have fallen into the sea as a starting point for their search. ROVs were deployed after sonar had targeted the precise locations of the engines, traveling 4,000m down to get a glimpse of the engines at rest.

Using ROVs to explore the deep sea is not that unlike going to space, Bezos remarked in his blog post. Images of gray horizon lines and seemingly lifeless empty space looked strangely similar to the images that came back from the NASA moon missions. Both deep sea and space exploration seemed impossible until very recently, and have required almost unimaginable feats of engineering.

What Bezos’s team has pulled up from the depths is not actually entire engines; right now it’s more like engine parts that, when restored, might contribute to two complete examples of these engines. Entire intact engines are difficult to come by, because of the whole crash-landing process. Bezos’s initial goal of finding the engines from Apollo 11 might be tricky, as it’s difficult to read the serial numbers on the rockets from the scrapes and nicks they’ve endured in their travels.

Bezos writes that he hopes to restore the engines, which are still NASA property, such that they tell the story of our aspirations for space, and the most advanced technology of a recently bygone era, and also maintain the marks left by re-entry and their time at the bottom of the sea. And that's the most compelling part of the story: Expeditions to space were the epitome of a now retro modernity. Perhaps what’s truly modern today is pulling the mangled remnants of space missions out of their watery graves with the next wave of cutting-edge technology.