Robot Astrobees Honey and Bumble Report for Duty on the ISS 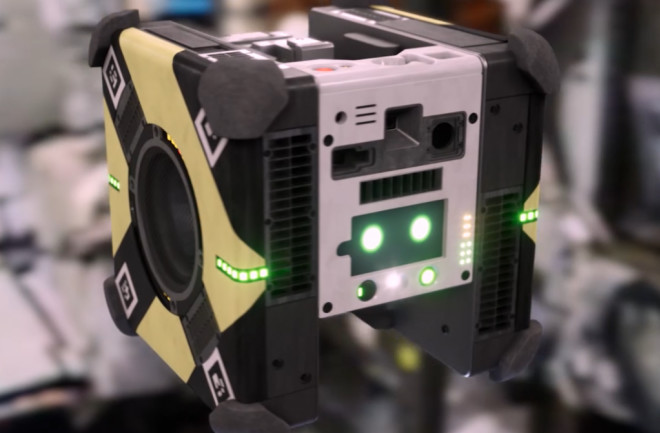 The Astrobees are autonomous robots that will experiment and perform tasks on the International Space Station. (Credit: NASA) On April 19, the Cygnus spacecraft docked at the International Space Station. Among plenty of other cargo, it carried special passengers: two small robots named Honey and Bumble. These “Astrobees” will soon become part of the station’s working crew, helping with such tasks as checking inventory, recording astronauts and experiments and running their own research projects.

Terry Fong, Chief Roboticist at NASA Ames, expects that the robots might start work as early as next week, after initial tests on Tuesday. Once astronauts have verified that the Astrobees made the trip to space intact, they’ll start their long testing period, which will last through most of 2019. Fong points out that while the robots have been tested extensively on the ground, it’s hard to replicate zero-gravity on Earth. The robots are meant to be autonomous, so astronauts and ground control will have to let the robots learn their way around the station and see if they can maneuver as intended. The Astrobees are shaped like cubes, a foot to a side. Each robot uses an electric fan for propulsion in the microgravity environment of the space station, and has six cameras that it uses both to navigate and to construct a 3D map of the ISS. Ground control can also guide the Astrobees, using them as eyes and ears to observe experiments, so astronauts don't waste time as glorified camera people. The robots will hopefully also serve as little helpers aboard the ISS, moving cargo or performing simple experiments. One of their first tasks will be to take inventory, saving astronauts from some mindless grunt work. The Astrobees will use an RFID scanner, like those at grocery store check-outs, to scan items on the station. As long as items are tagged, the robots should have no problem taking stock. But such simple tasks are only the beginning. “Astrobee was designed to do a number of different things,” Fong tells Discover. “One of the primary purposes was to serve as an in-space, zero-g robotics research lab." Each robot has three payload bays, he says, which NASA will make available to different research groups hoping to conduct experiments on the station. One of the first wave of projects is called SoundSee, built by Bosch and Astrobotic Technology Inc. SoundSee uses microphones and machine learning to listen to machinery on the ISS and diagnose problems. Fong likens it to people describing the sounds a troublesome car makes to their mechanic. SoundSee will both listen to and analyze the sounds of the station to see if anything is running at less than optimal performance. Another project, developed by a research group at Stanford University, would attach a gecko-inspired robot gripper to an Astrobee. Fong explains that, “the hand can hang onto flexible materials like bags or any place on ISS, the walls or other internal structures. The idea is you might end up with a universal robot hand.” The Astrobees already have a basic robot arm, but so far it’s still sitting on Earth. Fong expects it to ship to the ISS later this summer at the same time a third Astrobee, Queen, will also be delivered. As NASA moves forward with their plans for exploring the moon and then Mars, uses for robotic crewmembers will only grow. For instance, NASA plans to put a station in orbit around the moon, called Lunar Gateway. Unlike the ISS, NASA does not plan for Gateway to be continuously inhabited. “That's a place where humans may only be there four or six weeks out of the year,” Fong says. “How do you take care of a spacecraft like that? Maybe robots can do the caretaking while humans are away.” [embed]https://youtu.be/IEuAVK1nNp0[/embed]