Robonaut 2: Coming Soon to Space Stations and Assembly Lines Near You 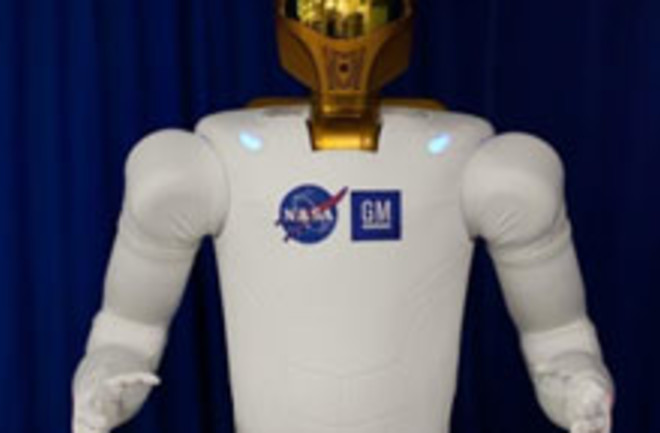 Automaker General Motors and NASA share a long history; it goes back to GM

supplying the lunar rover used during the later Apollo missions in the early 1970s [MSNBC]. In their latest partnership, GM and NASA have created the Robonaut 2--a humanoid robot that can be used both on Earth and in space. The collaboration comes a time when the Obama administration has called for

Robonaut 2, which looks a bit like a sleeker version of R2-D2, is a step up from the first iteration made 10 years ago by NASA and the

Defense Advanced Research Project Agency (DARPA). That robonaut was intended to be used mostly for space purposes. But the new version, R2, would be equally at home on the International Space Station or on a car assembly line in Detroit. R2 has been built to replicate the appearance of a human from the waist up so that it can fit into and work in the same spaces, doing the same jobs as people do, sometimes right alongside them

It has a humanoid torso, head, arms, hands, and fingers, and it displays remarkable flexibility. R2 can also lift and move up to twenty pounds with each arm, which NASA says is about four times more than other humanoid robots. Its four-jointed opposible thumbs allow it to use tools, much like a human. But while the upper half resembles a human, the bottom half of the robot is yet to be designed. Scientists expect R2 to either stand on one leg or be fitted with wheels. For now R2's design make it perfect for factory floors. In the past, GM had complained that it spent too much money installing protection systems and cages when it put a robot (usually just a set of mechanical arms with tools) on the assembly line. The company said they thrashed about, without any regard to who or what was next to them. With R2, scientists are hopeful they have a machine that is not just more dexterous but can also be an effective worker on the floor. GM executive Alan Taub explains that

Robonaut2’s arms are small and light, with excellent sensors to ensure they stop if they come in contact with something unexpected. “It has a very elegant sensing system so it can sense resistance in the arm,” said Taub. “A child’s hand will stop it” [MSNBC].

The partnership between the automaker and the space agency is expected to yield benefits for both.

NASA officials, meanwhile, are hopeful of employing R2 in space alongside human astronauts. It could serve, they say, as an assistant on spacewalks by going ahead of the crew to set up the work site. Related Content: 80beats: Laser-Powered Robot Climbs to Victory in the Space-Elevator Contest DISCOVER: Smart Food for Robots DISCOVER: Tiny Robot Walks Using Rat Heart Muscle DISCOVER: Man's Best FriendImage: NASA

GM sees the project as a way to develop new sensors, controls, and vision technology that can be integrated into future automobiles and factories to make them safer [Slashgear].