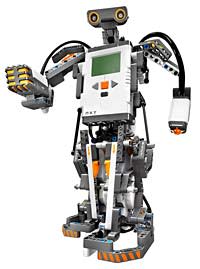 Alpha Rex, a Lego robot, can speak in response to sensory information.

"He sees! He hears! He talks! He walks! He feels!" This multitalented master of the sensory world is Alpha Rex, a robot created with Lego's Mindstorms NXT kit ($249.99). The user can build a variety of models (and invent a few) and program them to respond to their surroundings. This latest version of the kit boasts a 32-bit microprocessor, new sensors, an updated programming interface, Bluetooth capability, and a sleek look—plus 577 pieces, including more than 70 types of building elements.

Lego maniacs took earlier Mindstorms systems to a level of creative engineering that surpassed the company's wildest dreams. In developing NXT, Lego picked a team of Mindstorms black belts for design advice. Fan input will continue to shape the product, as enthusiasts are encouraged to devise their own hardware and software under Lego's "right to hack" policy. The price is steep, but Mindstorms NXT promises to deliver plenty of happy inventing.

Making Alpha Rex—installing software, assembling the bot, and creating basic programs—took a few hours. A light gauge, sound detector, range finder, and "touch sensor" (a button, that is) provide conditional input for your creation, while three motors allow for movement. Programming was straightforward with the intuitive drag-and-drop interface. The robot can be instructed to make sounds, show icons on an LCD display, and move in response to changes in light intensity, touch, or spoken commands.

Alpha Rex isn't the only Mindstorms creation—check out these other robotic critters. (Click to enlarge.) 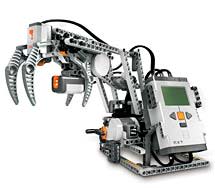 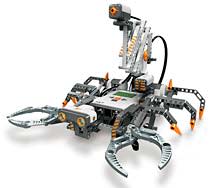 The artist and the ideologist

That marine biologist Ernst Haeckel's drawings of sea squirts (above) resemble antique Christmas ornaments, or that his jellyfish look like the balusters of a Louis Sullivan staircase, is more than coincidental. 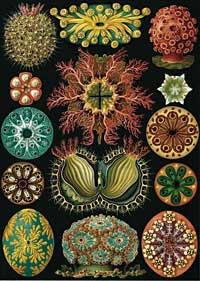 Haeckel's exquisite 19th-century science drawings—many depicting a selection of the hundreds of marine microorganisms he himself discovered—helped launch the Art Nouveau movement as well as the field of evolutionary biology. Visions of Nature: The Art and Science of Ernst Haeckel by Olaf Breidbach (Prestel, $100) is the third lavishly illustrated release about the scientist from Prestel, this one less about the beautiful illustrations and more about the scientist's life story.

Haeckel was so impressed with The Origin of Species upon its release that he strove to demonstrate that people could behold evolution by merely observing the physical traits of organisms. He can be seen as the first publicist for Darwin's ideas (sometimes tinkering with illustrations to prove his point). He was also the first to twist the theory into ideologies of racism and social Darwinism. His quip that "politics is applied biology" was used by the Nazis, as were his ideas about the positioning of races on the Darwinian template that he is crediting with inventing: the evolutionary tree.

We live in a time of war and an age of paranoia. So it's no wonder (and perhaps something of a relief to some) that a personal armored tank, the JL421 Badonkadonk, can be purchased from your armchair via Amazon.com for a mere $19,999.95. Although this vehicle, created by NAO Design in Palo Alto, California, is no match for an M1 Abrams, it will withstand paintballs and other very-small-arms fire. 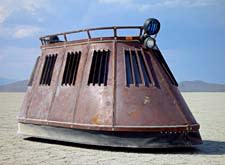 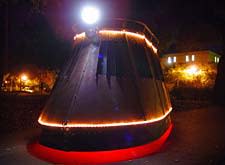 The JL421 Badonkadonk is available for purchase on Amazon.com.

True militants may say the slight-but-mighty 'Donk is more about impressing your pals at the Burning Man festival than practicality. Why bother with a speedometer, seat belts, and the ability to drive in reverse when you can startle passersby with fireballs? Inside the vehicle's otherworldly rust-patinated steel shell—which resembles the Sail Barge from Return of the Jedi—are more than 35 unlabeled switches that control a bewildering array of features, mainly for enhanced nighttime travel. The flashiest of these is the 'Donk's pyrotechnic system, fueled by a 2.5-gallon propane tank. Six flames encircle the roof, each capable of throwing frighteningly loud, hot fireball bursts. If that's not enough, two roof-mounted 2.5-gallon rocket pods propel flames rearward and—with a well-timed gas-powered acceleration—add the illusion of forward thrust. For milder entertainment, 1,000-watt speakers blast music from an MP3 player, and a microprocessor runs light shows. Red underbody lighting gives the impression of hovering, and a Cyclops-like headlight leads the way.

The 'Donk is not street legal, but it is definitely drivable, given a little finesse and a lot of practice. A secret push-button ignition starts the six-horsepower gasoline engine, which can reportedly reach 40 miles per hour. The reverse steering (pull lever left, go right) is a bit tricky, as is cornering, since the wheels lack a differential. Nonetheless, the 'Donk handles bumpy hard-packed dirt well.

A small deer peers skittishly at the camera, its eyes gleaming eerily green. Does it look suspicious? What about the fuzzy raccoon? Is it dabbling in some dubious activity? Are secret weapons concealed among the porcupine's prickles?

Welcome to the Bureau of Remote Wildlife Surveillance, a creation by artist Mark Dion that subverts our obsession with enemies hidden everywhere. In this case, the wily spies under scrutiny are wandering animals snapped by heat-sensitive "trap cameras" scattered about the landscape surrounding Dion's Pennsylvania home. Mounted in montages, the images are arranged on the walls of the bureau's putative head office, a room crammed with cabinets, rusty keys, and boxes labeled "Bats," "Weasels," and "New York Rodents." 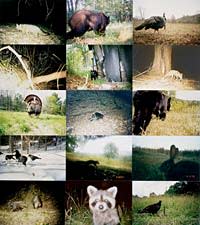 The Bureau of Remote Wildlife Surveillance (left) is one installation in Ecotopia: The Second ICP Triennial of Photography and Video. On view through January 7, 2007, at the International Center of Photography in New York City, the exhibition explores humanity's oft-troubled interactions with the natural world. Forty artists from 14 countries are participating in the show, and it seems that nearly all have embraced a common theme, juxtaposing a pristine environment and rude reminders of the human footprint.

In a video titled Amphibious (Login-Logout) by Jennifer Allora and Guillermo Calzadilla, a row of tortoises sit placidly on a log as it floats down China's sun-dappled Pearl River. The scenery is hardly serene. The implacable reptiles are dwarfed by tankers, tall cranes, skyscrapers, and cement stacks on the riverbanks. Simon Norfolk's

Scenes From a Liberated Iraq

depicts ostensibly peaceful spots: an orange grove, the magnificent North Gate of Baghdad. Close inspection, however, reveals a camouflaged surface-to-surface missile system amid the leaves of the trees and a mangled truck beneath the imposing arch. And in Mitch Epstein's photograph of the Amos Coal Power Plant in Raymond, West Virginia, cooling towers loom over houses and neat backyards filled with flowers and shrubs.

While these photographers seem to have chanced upon such strange contrasts, others manipulate the environment by introducing odd elements into untainted landscapes. Harri Kallio built life-size three-foot-tall models of the extinct dodo and set them down in Mauritius, the Indian Ocean island from which they were driven to extinction three centuries ago. In Doug Aitken's Plateau, sparrows and pigeons populate a city built entirely out of FedEx boxes (above). And in Catherine Chalmers's Safari, a cockroach emerges from a primordial sea into a jungle swarming with fearsome reptiles, insects, and frogs. This "return to nature" was actually filmed in Chalmers's New York City studio.

There's a whiff of nonsense in the sense of smell. Nearly identical molecules can have quite different scents—synthetic musk was accidentally created from a tweaking of TNT molecules in an explosives lab—and radically different structures 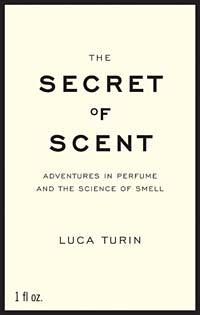 can smell similar, like the bitter almond tinge common to both marzipan and cyanide. We can't capture odor with a camera or play it back on a stereo, and scientists have had no idea how to predict aroma from molecular structure.

Biophysicist Luca Turin thinks he has cracked the code, a story he tells in The Secret of Scent: Adventures in Perfume and the Science of Smell (HarperCollins, $23.95). What exactly does a patch of tissue in the nasal passage sense—the shapes of molecules or their vibrations? Why does rosy fall somewhere between woody and lemony on the molecular map? This is a science book that reads like a mystery novel, with vividly drawn characters (both human and odoriferous) and chemical clues (the formation of mercury droplets, the olfactory illusion of caraway).

Turin helped launch a company to create perfumes from first principles. Many scientists doubt his theories, but his odors impress the fragrance industry. If Turin truly does decipher the basic chords of smell, perhaps someday we will notate and compose fragrance as we now can a musical symphony.

The SciencesEvent Horizon Telescope Looks Into a Black Hole's Jet