From skiing on Pluto to sailing Neptune, these vintage-styled space posters tout the wonders of the universe. 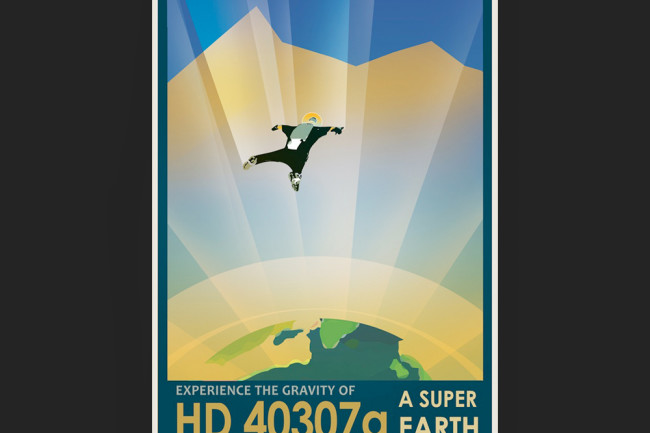 And now NASA has entered the retro space race with three new posters created by artists at the Jet Propulsion Laboratory. The travel destinations they depict are further afield: exoplanets in other solar systems, about which we know very little. But that hasn't stopped them from crafting some fascinating possibilities.

Here, their depiction of HD 40307g, a planet discovered in 2012. Twice as big in volume as the Earth, HD 40307g straddles the line between "Super-Earth" and "mini-Neptune." Scientists aren't sure if it has a rocky surface or one that's buried beneath thick layers of gas and ice.

One thing is certain though: at eight time Earth's mass, its gravitational pull is much, much stronger. It would be quite the skydive. 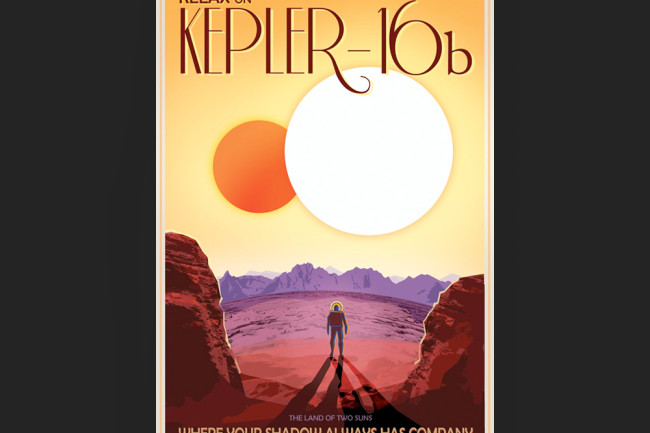 Another of NASA's creations depicts Kepler-16b, discovered in 2011. Like Luke Skywalker's planet "Tatooine" in Star Wars, Kepler-16b orbits a pair of stars. Depicted here as a terrestrial planet, Kepler-16b might also be a gas giant like Saturn.

Prospects for life on this unusual world aren't good, as it has a temperature similar to that of dry ice. But the discovery indicates that the movie's iconic double-sunset is anything but science fiction. 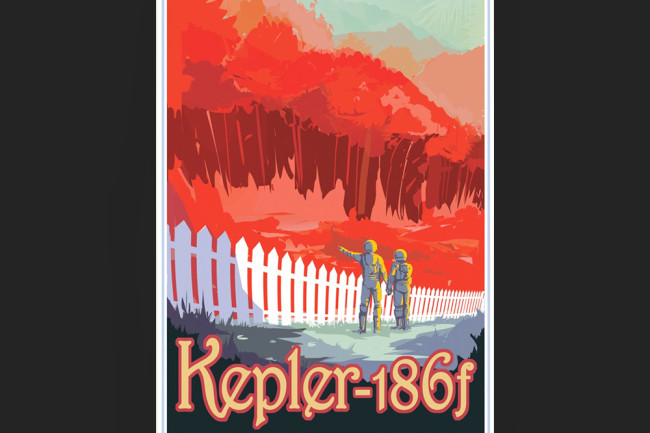 NASA's final image represents the newcomer Kepler-186f, discovered in 2014. Kepler-186f is the first Earth-size planet discovered in the potentially "habitable zone" around another star, where liquid water could exist on the planet's surface.

Its star is much cooler and redder than our Sun. If plant life does exist on a planet like Kepler-186f, its photosynthesis could have been influenced by the star's red-wavelength photons, making for a color palette that's very different than the greens on Earth. 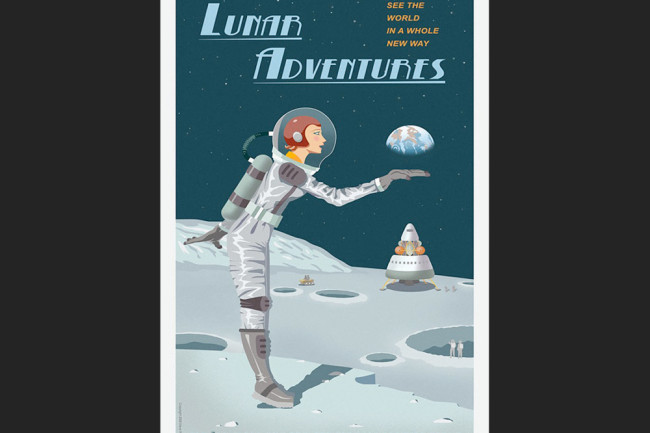 At a glance the postcards look like old-timey tourism posters you've seen before. The Work Projects Administration in the 1930s and '40s used a similar colorful style in its "See America" posters.

But contemporary artists have begun using the style to promote tourism of a more fanciful kind — to space. And while the excursions they advertise may be science fiction, the sentiment they tap into is real: a nostalgia for the glory days of manned space travel, and the hope that they might someday return.

This image, created by artist SteveThomas for the Intergalactic Travel Bureau, is one example. The Bureau is an outreach project aiming to educate the masses about astronomy through mock travel planning. Want a short, relaxing getaway? its agents might ask. Forget Florida — choose the moon! Since the moon spins on its axis at the same speed it revolves around Earth, what scientists call synchronous rotation, you’ll always have a good view of home. And the decreased gravity, about one-sixth of Earth’s, is perfect for taking slow, peaceful bounds among the craters. 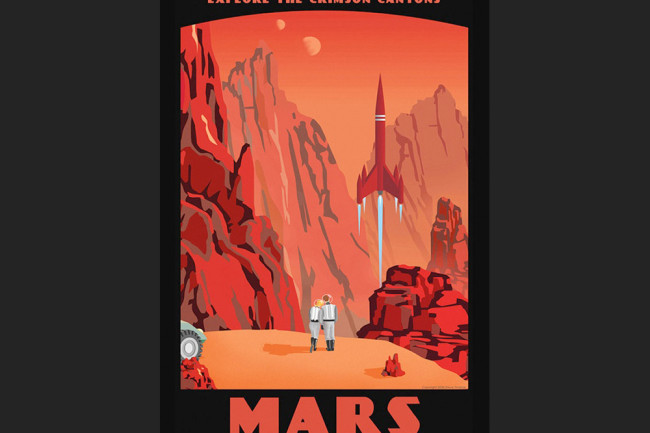 The Intergalactic Travel Bureau describes itself as an “interactive science-theater experience” and is staffed by professional actors and astronomers. In 2014, the group set up shop in San Francisco, Manhattan and Washington, D.C., promoting various space excursions, including this one to Mars.

In an interview with Nautilus, astronomer and “travel agent” Jana Grcevich touted Mars as one of the key locations for hiking, thanks to the planet’s beautiful red rocks, which get their color from their high iron oxide content. Mars also boasts an incredible gorge, called Valles Marineris, which is at least three times as deep as the Grand Canyon and spans one-fifth of the planet — great for a bit of low-gravity rock climbing.

But travelers beware: temperatures on the Red Planet average -81 Fahrenheit, putting the “extreme” in extreme sports. 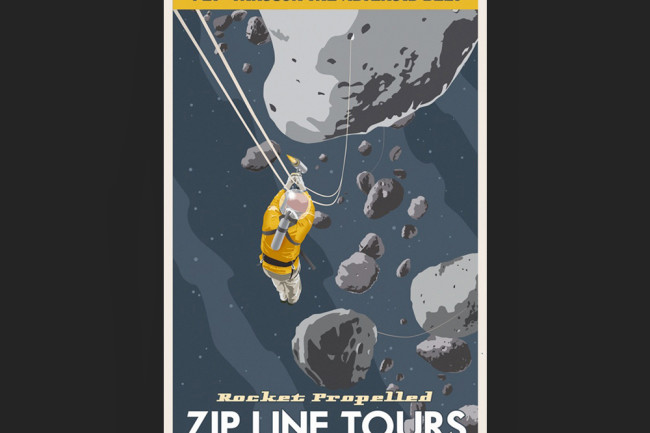 Our solar system's main asteroid belt is located between Mars and Jupiter and contains more 1.1 million large asteroids (bigger than .6 miles). Although traveling between these airless, rocky bodies on a rocket-propelled zip line would certainly be thrilling, it would be a long trip; according to NASA, they’re usually separated by at least 620,000 miles.

In all, more than 10 missions have been sent to study asteroids over the years. Scientists hope that studying asteroids might reveal more about the evolution of the solar system, as well as the origin of life on Earth. 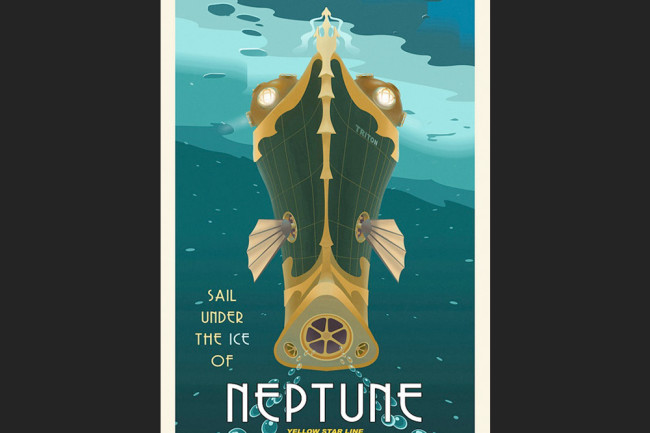 Tired of those boring rocky worlds? Journey to the brilliant blue ice giant Neptune, where an ocean liner will spirit you through a sea of water and other melted ices, as shown in this image. But beware of the treacherous conditions; winds on the planet can be nine times stronger than those on Earth.

There’s no true surface on Neptune, since its atmosphere gradually merges with the water, but a trip above the clouds will afford you a gorgeous glimpse of the planet’s six rings and 13 moons. Triton, the largest of Neptune’s moons (and the name of your trusty ship), is one of the coldest bodies in the solar system and reflects 70 percent of the sunlight that hits its frosty surface.

There are still many unknowns about the planet, including the source of its vibrant color. Voyager 2 was the first and only spacecraft to visit Neptune and is responsible for much of what we know today. 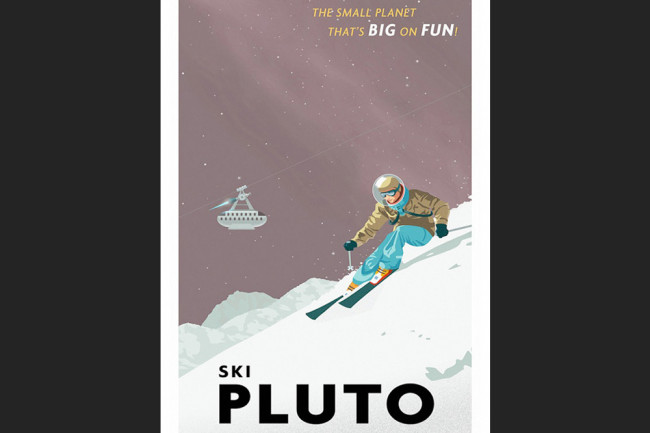 Pluto, demoted to a dwarf planet in 2006, likely has a hard, icy surface — not great for powder skiing like this poster shows. Yet it has just 1/15^th the gravity of Earth, a clear boon for the snow sports industry.

After a grueling day on the slopes, a bit of lunar gazing could be just the ticket. Pluto boasts three moons: Charon, Nix and Hydra. Charon is about half the size of Pluto, while Nix and Hydra, both discovered in 2005, are less than 100 miles wide.

Surprisingly little is known about Pluto’s makeup and atmosphere, a fact NASA hopes to remedy with its New Horizons mission. The spacecraft, which launched in 2006, is expected to reach Pluto and its moons later this year. 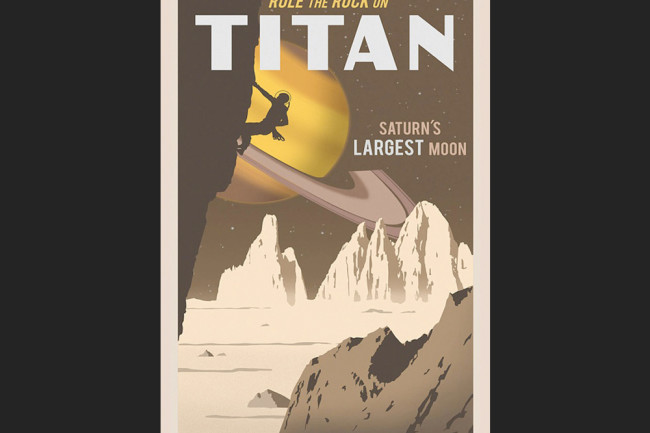 Thanks to the NASA’s Cassini spacecraft, which mapped a good portion of Titan’s surface, scientists know that the moon boasts lakes and seas of liquid methane and ethane. Why not try a peaceful walk along the shore? Titan’s seas are named for mythical sea monsters, and its icy mountains, like the one shown here, are named after the mountains in J.R.R. Tolkien’s Middle Earth.

Combined with the orange haze of its atmosphere, produced by light interacting with various chemicals, Titan makes a great spot for a romantic getaway. Unfortunately, the trip there could take more than six years and set you back several billion dollars. Fortunately, according to Grcevich, they do have layaway program.