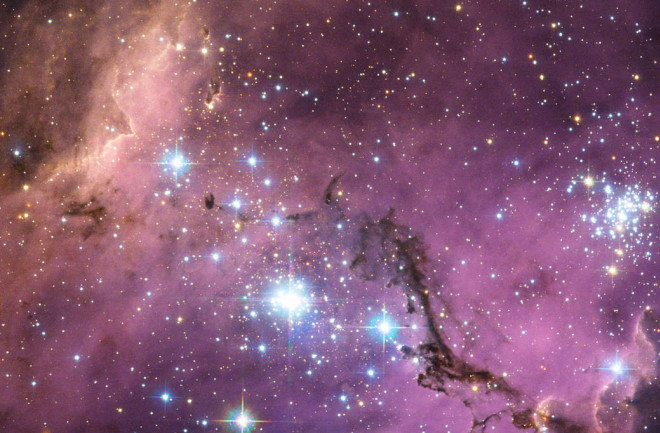 The Large Magellanic Cloud (LMC), a satellite galaxy of the Milky Way. Researchers have discovered another Milky Way satellite that's as large as the LMC but is 10,000 times fainter. (Credit: ESA/NASA/Hubble)

An unusual, enormous, and ancient dwarf galaxy looms near the Milky Way, 424,000 light-years away from Earth in the Antlia constellation, a new study found using data from the European Space Agency’s (ESA) Gaia spacecraft. Scientists estimate that dozens of smaller galaxies orbit the Milky Way, pulled in by our galaxy’s intense gravitational forces. Now, a team of researchers using data from the European Space Agency's (ESA) Gaia spacecraft, has discovered a new satellite galaxy named Antlia 2 (Ant 2) with a host of strange features. To make this discovery, a research team, led by Gabriel Torrealba of Academia Sinica in Taiwan, used data from the Gaia spacecraft's second data release. They used the data to search for Milky Way satellites, or objects orbiting the Milky Way. They looked at the motion and magnitude of stars and the brightness and variability of objects near the Milky Way to find a group that was moving together in a way that indicated they were all part of a single dwarf galaxy. Ant 2, which researchers estimate to be about 11.2 billion years old, is enormous, about one-third the size of the Milky Way. It's about the same size as the Large Magellanic Cloud (LMC), another nearby dwarf galaxy, but is much more lightweight. The new dwarf galaxy is extremely diffuse, meaning its component stars, gas and dust are spread out over a very large area. In fact, Ant 2 is the most diffuse object ever detected, according to a statement. This means that the galaxy doesn't give out much light. So, while Ant 2 might be the same size as the LMC, it's actually 4,000 times fainter.

The findings also give researchers the chance to study how dwarf galaxies form to be dimmer and wispier than previously thought possible. It could even potentially lead to the discovery of more dim, diffuse galaxies out there that were previously overlooked. "Ant 2 could be the tip of an iceberg—a population of extremely diffuse galactic dwarf galaxies even fainter than the numerous satellites detected in wide-area photometric surveys over the past two decades. Fortunately, Gaia data – as illustrated by this work – may be the key to testing this hypothesis," the researchers said. Ant 2 was officially discovered at the Flatiron Gaia Sprint 2018, a series of events where researchers gather to collaborate and complete scientific papers. These findings have been detailed in a paper published on the pre-print server arXiv, but not yet peer-reviewed.