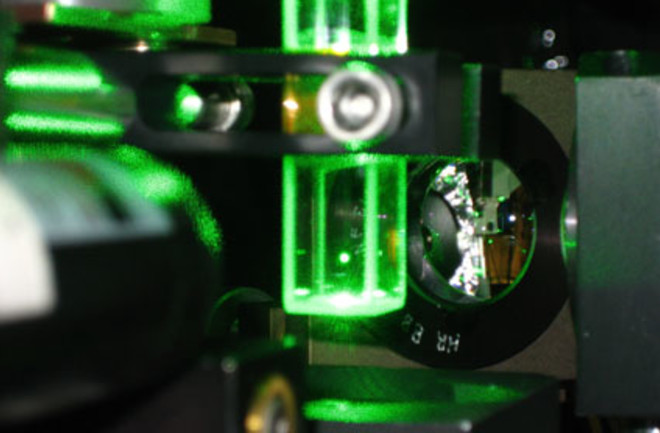 A team of scientists led by Mark Raizen at the University of Texas at Austin had the gumption to take on Einstein. And according to their new paper in Science, they won. The point of contention? The lovechild of statistical mechanics and thermodynamics: Brownian motion. Here's how they did it. Step 1. Learning the Moves In the 1820s, Scottish botanist Robert Brown looked through a microscope at plant bits floating in water, and wrote [PDF]:

"I observed many of them very evidently in motion . . . [these motions] arose neither from currents in the fluid, nor from its gradual evaporation, but belonged to the particle itself."

To make sure that the pollen wasn't alive--actually swimming around--Brown tried it with coal dust. Dust had the same moves. Today, we understand that Brownian motion, the random break dance of these tiny particles, comes from the water molecules bumping against them. In 1905, Einstein determined the properties of the liquid and the particles that would help describe their wanderings and the motion of molecules. But he also said that it was "impossible" to determine at any moment the speed and direction of a single particle during this dance. Step 2. Water Into Air The reason for Einstein's doubt? The particles bumped around too quickly to ever measure their speed and direction:

He believed that it would be impossible in practice to track this motion, given the incredibly short timescales over which the Brownian fluctuations take place. [PhysicsWorld]

How quick is too quick? A very tiny glass sphere (think micrometers) in water would change direction almost every 100 nanoseconds (about the time it takes light to travel 30 meters). Raizen wanted to make the time between moves longer, so they didn't use water. They put the glass beads on a dance floor with fewer partners, using a medium whose molecules are farther apart: air. Step 3. Floating on Air Pollen doesn't float on air. Neither does a micrometer-sized glass bead. Raizen's team needed something to hold the glass up. They decided that the answer was light particles in a pair of laser chopsticks:

In 1907, Einstein likely did not foresee a time when dust-sized particles of glass could be trapped and suspended in air by dual laser beam "optical tweezers." Nor would he have known that ultrasonic vibrations . . . would shake those glass beads into the air to be tweezed and measured as they moved in suspension. [ScienceDaily]

They could control a glass bead's motion to the precise point where it was still dancing the Brownian, but not too fast to follow. But the lasers allowed them to do more than suspend the glass: By looking at how the glass bead deflected the light while it was buffeted by air molecules and bounced about on the chopsticks, the researchers could determine what Einstein dubbed impossible, a bead's instantaneous direction and speed. Step 4. Future Directions Understanding these discrete steps will help wherever Brownian motion rules: everywhere from cell guts to the scent of perfume wafting through apparently stagnant air.

"It is certainly an important achievement to be able to directly measure the velocity of the Brownian particle at these short times," says Christoph Schmidt of the University of Göttingen in Germany. "Technically it is now becoming possible to track individual particles with very high time and spatial resolution, limited in the end only by how many photons per second one can get to interact with the particle." [New Scientist]