Stop me if you've heard this from me before, but Saturn and its moons are weird. Take Hyperion. 300 km across (180 miles), yet only half as dense as water! Even normal ice is denser than that, so something weird is going on there. It's most likely that it's full of holes, like a loosely agglomerated rubble pile. It may be nearly half empty space! So it's no surprise that such an odd, odd little world should make such a brooding target of the Cassini spacecraft's cameras: 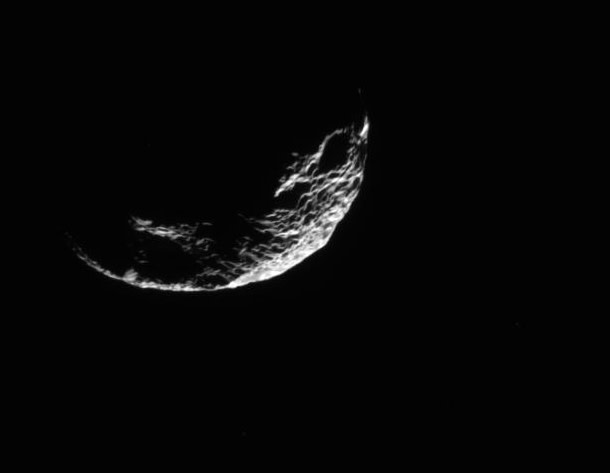 Cassini passed about 75,000 km (45,000 miles) from Hyperion on November 28, 2010, and took dozens of images of the moon. It was still 140,000 km (84,000 miles) away and on approach when it snapped the dramatic shot above. The picture is raw and unprocessed, so it still has some "image artifacts" in it; defects in the camera that can be easily corrected using pipeline software. Still, you can get a sense that the moon, well, just ain't quite right. Then Cassini got closer, and took many pictures like this next one: 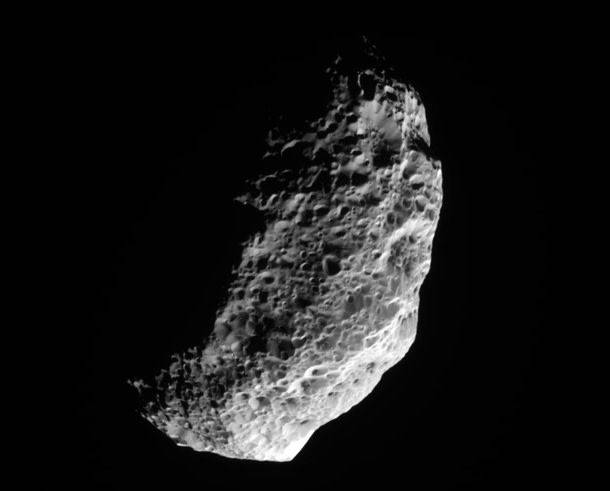 Man, Hyperion is just so weird! The craters don't look like what we're used to. The rims are sharp, and the walls shallowly slope, making craters look like inverted cones. Some people say the moon looks like a sponge, but in my mind it looks like it's got the consistency of loose, weak Styrofoam that some kid has poked at hundreds of times with his finger. That may not be too far off. The Styrofoam part, I mean, not the bit about getting poked by a child's finger. Hyperion orbits Saturn at an average distance of 1.5 million km (900,000 miles), and has an elliptical orbit. Visits by Cassini are not common, so there's still a lot to learn about the moon. Passes like this recent one will help figure out what the heck is going on here. Was Hyperion once a part of a bigger moon, an object shattered by a vast collision? Or was Hyperion itself once shattered by an impact, only to loosely reassemble itself as we think happens with some asteroids and comets? Or both, or neither? We know a huge amount about Saturn and its moons, and a lot of that is due to Cassini. But I suspect we could keep it orbiting the ringed world for another hundred years and still have much to learn.

Related posts: - You're as cold as ice... but less dense - Hyperion!