Over at The Planetary Society Blog, guest blogger David Seal (filling in for Emily Lakdawalla who just had a baby) has written a really good article about radar observations of Earth made from the Space Shuttle. Normally that's not my cup of tea, but David has a great and personable writing style that makes the topic fun, interesting, and yes, inspiring. He writes very convincingly about why we do science from space, and how it has an impact on us... in many ways, including mapping volcanic events, assessing the damage from the 2004 tsunami, seeing how the flooding affected New Orleans, and much more. The coolest thing he wrote about, IMO, was about mapping the K/T impact crater in Chixchulub, Mexico. That's the one that gave the dinosaurs a Really Bad Day. Here's a radar image he mentions: 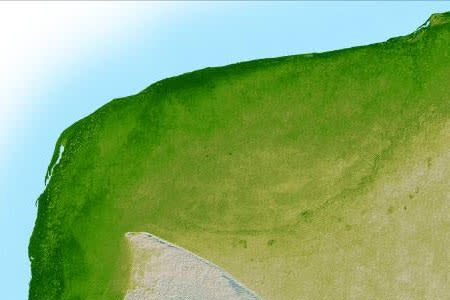 That arc in the lower right is part of the rim of the crater. It's basically impossible to see from the ground, and invisible even from space using most normal methods of observation. But the very sensitive radar mapping technique reveals it clearly. Arguments have raged about how big the impact event was, spawned by uncertainty in the crater size. Was the asteroid big enough to wipe out the dinosaurs all by its lonesome, or was it not quite enough to do that, and instead just the start of a series of events that killed them all off? These sorts of questions -- and face it, they are pretty important ones! -- can be solved or at least helped along by observations like the ones David writes about in the blog. He makes a pretty good case for science, and science from space. The next time someone asks you why we're "wasting money" on space, you can send 'em to that blog entry.