Remember when I asked for suggested topics for an upcoming Bloggingheads discussion with David Albert about quantum mechanics? The finished dialogue is up and available here: 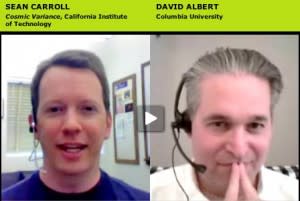 I would estimate that we covered about, say, three percent of the suggested topics. Sorry about that. But perhaps it's better to speak carefully about a small number of subject than to rush through a larger number. And I think the dialogue came out pretty well, if I do say so myself. (And if not me, who?) We started out by laying out our respective definitions of what quantum mechanics "is," in terms that should be accessible to non-experts. (One user-friendly answer to that question is here.) Happily, that didn't take up the whole dialogue, and we had the chance to home in on the real sticky issue in the field: what really happens when we observe something? This is known as the "measurement problem" -- it is unique to quantum mechanics, and there is no consensus as to what the right answer is. In classical mechanics, there is no problem at all; you can observe anything you like, and if you are careful you can observe to any precision you wish. But in quantum mechanics there is no option of "being careful"; a physical system can exist in a state that you can never observe it to be in. The famous example is Schrodinger's cat, trapped in a box with some quantum-mechanical killing device. (Someone must write a thesis on the ease with which scientists turn to bloodthirsty examples to illustrate their theories.) After a certain time has passed, the cat exists in a superposition of states: half alive, half dead. It's not that we don't know; it is really in a superposition of both possibilities at once. But when you open the box and take a look, you never see that superposition; you see the cat alive or dead. The wave function, we say, has collapsed. This raises all sorts of questions, the most basic of which are: "What counts as `looking' vs. `not looking'?" and "Do we really need a separate law of physics to describe the evolution of systems that are being looked at?" In our dialogue, David does a good job at laying out the three major schools of thought. One, following Niels Bohr, says "Yes, you really do need a new law, the wave function really does collapse." Another, following David Bohm, says "Actually, the wave function doesn't tell the whole story; you need extra (`hidden') variables." And the final one, following Hugh Everett, says "You don't need a new law, and in fact the wave function never really collapses; it just appears that way to you." This last one is the "Many Worlds Interpretation." I want to actually talk about the pros and cons of the MWI, but reality intervenes, so hopefully some time soon. Enjoy the dialogue.