The Apollo 11 pioneer charts a radical course back into space. 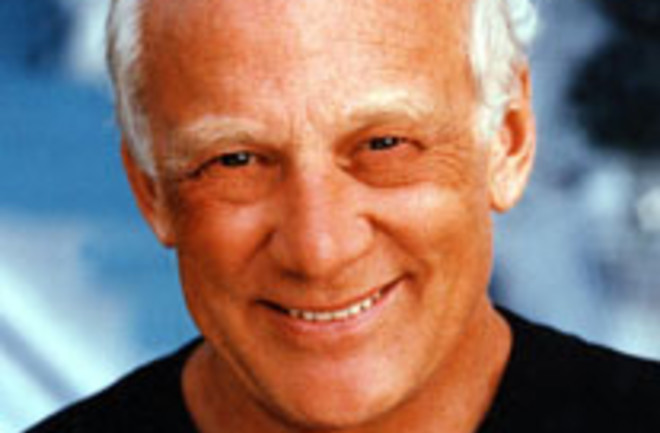 Buzz Aldrin is the quintessential icon of NASA's past glory, the figure in the iconographic photo of a lone astronaut standing on the moon with the Eagle lander (and photographer Neil Armstrong) reflected in his visor. But Aldrin has a new mission as well. An aeronautics expert with a Ph.D. from MIT, he has developed his own plan to take us back to the moon, to the asteroids, to Mars, and beyond. He founded Starcraft Boosters, a rocket design company, in 1995 to pursue his vision for manned space exploration.

You're proposing the creation of a kind of interplanetary transit system, "the Cycler." How does it work?

I was looking for a superior way to go back to the moon. It occurred to me to put a spacecraft on a continuous orbit, where it would swing by Earth, then swing by the moon, then continue to cycle back and forth. As the spacecraft swung by Earth, a smaller craft could join up with it and ride along to the moon and get off. When people are ready to leave the moon, they could rejoin the Cycler or, if there were two, get on another one. It turns out not to be very practical for putting people on the moon. But to get from Earth to Mars, it does make sense.

President Bush is having NASA go back to the moon before Mars. Why is that necessary?

It is not necessary. It is prudent. We could try to go to Mars directly, but we would be more successful if we had the chance to rehearse. We would have the experience behind us. Not 40 years behind us but immediately behind us.

Does this mean colonization of the moon?

It means explorers go there, then leave once they learn what they need to learn, and the science people leave when they get what they need. Then the facilities could be turned over to commercial activities. That would initially involve people, but the moon is not a very habitable place. Robotic devices should be able to continue to operate without people. Unless we are sending humans beyond Earth orbit, it is hard to justify why the humans are there unless they want to be there for the experience: adventure travelers, global space travelers—you might call them tourists.

How do you make the experience affordable? Richard Branson's Virgin Galactic plans to charge $200,000 just for suborbital flights.

One way to broaden the availability is with a nationally authorized, nontransferable selection process. You can call it a lottery. You buy a ticket and win, and you go into space. You could also have contests, television game shows.

You're not concerned that giving away a trip to space on a game show might seem undignified?

That's not undignified. That's the way things are done. I don't watch American Idol, but I wouldn't call it undignified. The purpose is to generate an understanding of what space travel is like among more and more people, so they'll be more inclined to support exploration. Space tourism is inevitable, and the sooner it happens, the more support we will have.