Pulsars Could Guide Autonomous Spacecraft of the Future 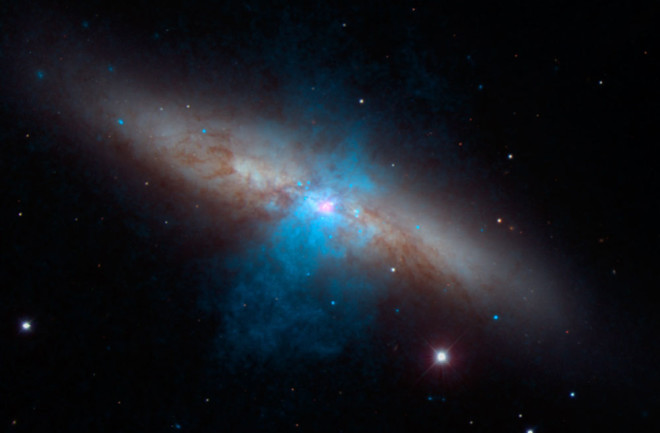 A pulsar (pink, center) at the center of the galaxy Messier 82. (Credit: NASA)

Although it’s possible for space missions to communicate data with Earth, the process is anything but fast. Voyager 1, for example, takes about 19 hours to send a signal back to Earth, and that lag only increases as the spacecraft gets further away.  For truly long-term, deep space missions, the significant amount of time it takes to send a signal isn’t going to cut it. The spacecraft will need to adjust its own trajectory without relying on ground navigation. That’s where pulsars come in.

Last week, a group of NASA engineers showed that fully autonomous space navigation is possible through the use of X-rays, a discovery that could overhaul our approach to deep space travel. The X-ray guidance system was successfully tested during the Station Explorer for X-ray Timing and Navigation Technology (SEXTANT) experiment. Using  pulsars timed down to the millisecond, the test craft relied on X-rays to pinpoint the location of a space object moving at thousands of miles per hour.

“This demonstration is a breakthrough for future deep space exploration,” said Jason Mitchell, an aerospace technologist at NASA’s Goddard Space Flight Center and SEXTANT project manager, in a news release. “As the first to demonstrate X-ray navigation fully autonomously and in real-time in space, we are now leading the way.”

Though the Global Positioning System (GPS) can track objects located on Earth or in low-Earth orbit, GPS navigation isn’t an option for long-distance spacecraft because its Earth-orbiting satellite network quickly loses the signal once the craft travels away from Earth. In order to autonomously track deep space vehicles, researchers needed to find a strong signal that is capable of propagating many light-years. For this, the researchers turned to pulsars — the rapidly rotating cores of neutron stars — because they are available virtually everywhere (especially in deep space), and emit strong X-ray signals.

To test the accuracy and ease of X-ray navigation in space, the SEXTANT experiment, funded by NASA’s Space Technology Mission Directorate, teamed up with NASA’s Neutron-star Interior Composition Explorer (NICER), an external attached payload on the International Space Station (ISS).

“We’re doing very cool science and using the space station as a platform to execute that science, which in turn enables X-ray navigation,” said the principal investigator for NICER, Keith Gendreau of Goddard. “The technology will help humanity navigate and explore the galaxy.”

NICER has studied various aspects of neutron stars since its ISS deployment in June 2017, and it is currently using its 52 X-ray telescopes and silicon-rift detectors to study the radiation that pulsars emit into the electromagnetic spectrum. Pulsar radiation comes to us as narrow beams of light that flash when they speed past us, similar to the flashes of light emitted from a lighthouse. Their pulsations are also predictable in nature, enabling them to serve as highly meticulous timing agents, comparable to GPS’ atomic-clock signals. In fact, they are so predictable that the arrival times for beats of a millisecond pulsars can be predicted years into the future, with timing accuracies in the microseconds.

During the SEXTANT experiment, researchers chose four millisecond pulsar targets and positioned NICER so that it could detect X-rays within the targets’ narrow beams of light. To obtain timing data, NICER collected 78 measurements over a two-day period. These were then fed into SEXTANT’s onboard algorithms, creating a navigational solution that disclosed NICER’s orbital position. The solution was then compared to NICER’s onboard GPS-derived location.

Though NICER travels aboard the ISS at a speed of over 17,500 miles per hour (28,164 kilometers per hour) relative to the Earth, the study aimed to pinpoint NICER’s location to within a 10-mile (16-kilometer) radius. The team was allotted two weeks to locate the craft with such accuracy, but was able to detect its location within the given radius after only eight hours. Location accuracy improved from there on out, with a signification portion of the data from the remainder of the experiment being within three miles of the craft’s true location. Although three miles might not seem that precise, it’s sufficient for deep space travel due to the vast distance between objects, which are typically millions of miles apart.

Now that the researchers have proven X-ray navigation is possible, the team will start working on updating and improving the software in anticipation of an additional experiment later in 2018. They will also work toward narrowing the instruments’ size, reducing power requirements, and improving sensitivity. The goal is to make X-ray navigation technology readily available for all space missions that could benefit from autonomous navigation without ground communication.

“This successful demonstration firmly establishes the viability of X-ray pulsar navigation as a new autonomous navigation capability. We have shown that a mature version of this technology could enhance deep-space exploration anywhere within the solar system and beyond,” said Mitchell. “It is an awesome technology first.”