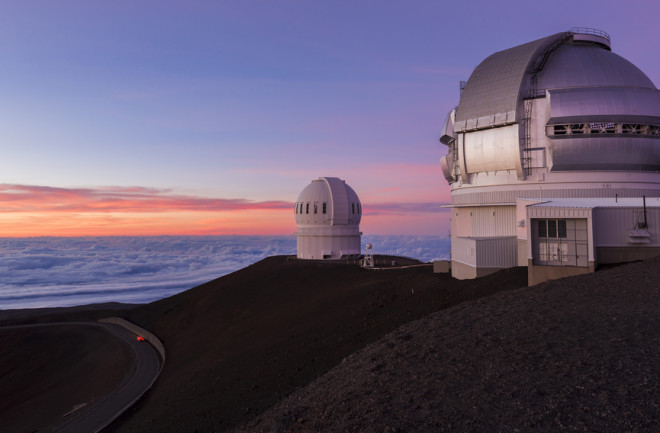 The Thirty Meter Telescope (TMT) has had a tumultuous start. Set to be the world’s largest visible light telescope, construction was slated to begin in 2015 near the peak of Hawaii’s Mauna Kea. But protests over construction on a mountain considered sacred by some Native Hawaiians stalled the project and sent it back to the courts. As a result, the TMT had to restart the lengthy approval process.

The telescope has since been approved again, but with construction set to start this week, protestors have once again blocked access to the summit. So far the protests have been peaceful and no arrests have been made.

The Peak of Observing

TMT has been in the works for years, and Mauna Kea was chosen for its home in 2009. While Mauna Kea is already the site of a dozen high-quality telescopes run by universities and science institutions from around the globe, the land itself is under lease from the state of Hawaii’s Board of Land and Natural Resources (BLNR) and administered by the University of Hawaii, making its use complicated.

The current terms of the lease state that the land should be returned to its natural state when the telescopes reach the end of their lifetime. The lease on Mauna Kea expires in 2033, when 40 of the 45 square kilometers the university administers will revert to state lands. And some people, many of them Native Hawaiians, believe that the land never should have seen development at all. Mauna Kea is a sacred site in Hawaiian tradition, and some object to the construction and traffic the science community has brought to the mountain.

The astronomy community values the mountain for its exceptionally clear skies thanks to the peak’s altitude, island location and favorable weather. But the issue of access is complex, with some astronomers siding with the protestors, and some Native Hawaiians approving of the telescope project.

The project does have a legal basis, though. The BLNR re-approved TMT’s permit in 2017, and the Hawaii Supreme Court upheld this ruling in 2018.

On Monday, Hawaii state officials attempted to close the road to the summit so that construction could begin. Protestors arrived early in the morning, linking arms through a grate in the road to obstruct any construction traffic, similar to their efforts in 2015. Officials were able to install a gate across the road after promising protestors would not be arrested. Protestors are now demanding that gate be removed.

Hawaii’s governor David Ige announced last week that he would be utilizing the National Guard for transportation and to enforce road closures, but that they would be unarmed and not used for law enforcement during the protests, NBC reports.

So far there have been no arrests linked to the protests, and no construction equipment started up the mountain.