Prepare for an Explosion of Gravitational Wave Detections 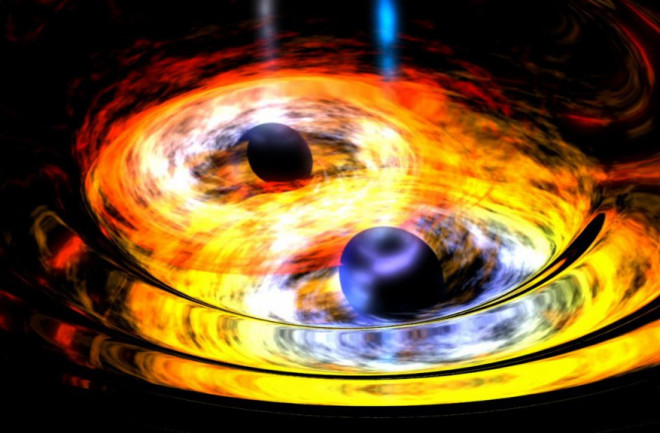 An illustration of merging black holes. (Credit: NASA) In the time it takes you to finish your lunch break, several pairs of black holes will merge somewhere in the universe. That’s the incredible picture emerging from early insights by the Laser Interferometer Gravitational-wave Observatory. In February, LIGO announced the first detection of gravitational waves, confirming a key prediction of Albert Einstein’s theory of general relativity. That historic wave reached Earth at light speed on September 14, 2015, from a pair of black holes that collided 1.3 billion light-years away. But LIGO heard another suspect gravitational wave signal that got less attention. Though it wasn’t as strong, it looked promising.The Other Collision An analysis of that event, labeled LVT151012, has shown with 90 percent certainty that it also came from a pair of colliding black holes. That’s not sufficient for scientists to deem it a “detection,” but the LIGO team is confident enough that they’re using it to start piecing together a picture of black holes in the universe. “The best guess we have is that binary black holes merge in our universe at the rate of a few per hour,” says LIGO scientist Jolien Creighton of the University of Wisconsin-Milwaukee. Assuming LIGO’s early data are not exceptional, scientists will soon piece together the first black hole census. Extrapolating from those two mergers in 16 days to the larger universe beyond what LIGO can see, the team calculates that a few binary black holes should merge every hour in the cosmos. “It does imply that we should have tens of detections over the next few years, and hundreds through the end of the decade,” says Hanna. “That’s enough to do some pretty significant astronomy. That’s a big population.” Based on the signals seen so far and the sensitivity of LIGO’s detectors, scientists estimate that they’ll see between 10 and 100 black hole mergers during the instrument’s next observing run, which begins in late summer. “When the second science run turns on, we’ll be seeing more systems at rates of once every few days or weeks,” Creighton adds. “And the run will also last longer, so we will be collecting more and more events.” The First Census Black holes are well suited to their names. They emit no light. So, before LIGO, astronomers could only infer a black hole’s existence by watching it interact with objects caught in their gravitational grip. Astronomers spotted most of the known stellar mass black holes indirectly: they observed X-rays that were emitted as they feed on a stellar companion. “In some ways, LIGO provides the first real direct way of probing black holes,” says LIGO scientist Chad Hanna of Pennsylvania State University. Physicists knew they existed, but the instrument allowed them to actually measure a black hole’s space-time and show it’s consistent with theories.

(Credit: Roen Kelly/Astronomy) LIGO accomplished this because it isn’t bound by sight. Its twin detectors can see tiny stretches and squeezes of space-time from large objects merging. These gravitational waves carry information about a black hole’s mass, spin and location. To date, only some 19 stellar mass black holes are known in the Milky Way. And considering our galaxy has hundreds of billions of stars, that number is certainly incorrect. However, the true black hole population size remains unknown. In fact, before LIGO, astronomers weren’t positive that nature could create binary black holes at all. “We’d never seen a binary black hole, so we didn’t know for sure that they existed,” says Creighton. “And, if they did exist, we didn't know if they would ever merge.” Instead, most experts thought LIGO’s first gravitational wave observations would come from merging binary neutron stars. Astronomers had already seen these collapsed supernova cores orbiting each other. Theoretical estimates predicted LIGO would catch around 40 of these neutron star mergers, and between 10 and 20 black hole mergers, each year. Rewriting Stellar Evolution One of the first things this black hole census can do is rewrite the textbook version of stellar evolution. Scientists have a pretty good idea of how single stars will live and die. Stars like our sun will grow into behemoths called red giants before they shed their outer layers and become a planetary nebula. Larger stars — those with more than about eight solar masses — will explode as supernovas. And, theoretically, any star at least 25 times bigger than the sun will end its life as a black hole. But most stars in the Milky Way are actually binaries. So, understanding such stellar pairs is fundamental to understanding stellar evolution as a whole. “Binary evolution is more complicated than single star evolution,” says Creighton. “There’s a lot more processes that can happen — mass exchange between the binary companions, winds, kicks during supernovae, all sorts of things.” Interestingly, many binary evolution models didn’t predict binary black holes as big as the ones LIGO announced in February. That first gravitational wave signal came from the merger of black holes 36 times and 29 times more massive than the sun. These stars likely formed in low-metal environments — a term astronomers use for anything more complicated than hydrogen or helium — during the early universe. But it’s also possible these binary black holes are born in dense clusters where stars interact more often. As more detections stream in from LIGO, astronomers can begin to get an idea for the size of most stellar mass black holes. The likely second detection, LVT151012, had black holes of 23 and 13 solar masses — more in line with what astronomers expected to detect. “When we see more and more of these black holes, and we get this mass distribution, we should be able to distinguish between the different scenarios for where these stars are coming from,” says Creighton.