Powerful Winds Save Ancient Starburst Galaxy from Burning Out 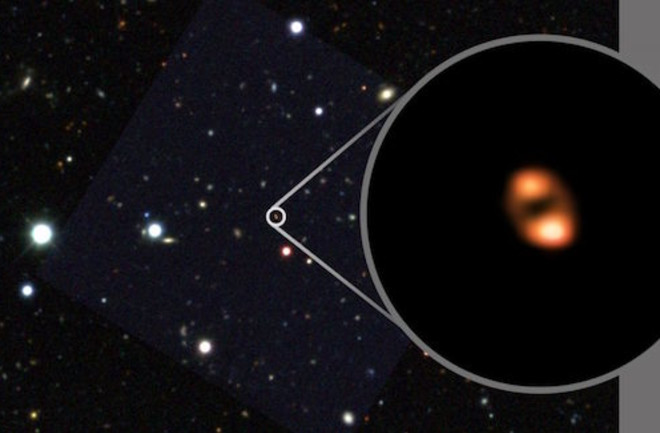 Researchers witness a one billion year old galaxy blow molecular gas to its outskirts to avoid an overproduction of stars. Credit: ALMA (ESO/NAOJ/NRAO), Spilker; NRAO/AUI/NSF, S. Dagnello; AURA/NSF The years following the Big Bang were undoubtedly an exciting time in our cosmological history, with galaxies birthing hundreds or even thousands of hot new stars each year. But despite rapid star formation being exhilarating, it’s far from sustainable.

Researchers have long wondered how these ancient starburst galaxies managed to conserve their gas and not burn out during the early years of their existence. One theory is that fierce winds would carry star-forming gas out to their borders, where it would either escape the galaxy or linger in the halo — preventing an overproduction of stars. The gas would slowly make its way back into the galaxy, where it would initiate a stellar resurgence at a less turbulent time. Researchers have witnessed this occurring in much closer starburst galaxies, but had yet to witness it in the distant universe. But now, with the help of gravitational lensing and the Atacama Large Millimeter/submillimete Array (ALMA), a team of astronomers was able to observe forceful molecular winds gusting away from a galaxy over 12 billion light years away. The findings suggest that by blowing their gases away, ancient galaxies had the ability to regulate their star formation and control their galactic evolution. Published in the journal Science, a team of researchers studied SPT2319-55, a galaxy that was quickly churning out stars just one billion years after the Big Bang. The galaxy is extremely far from Earth, but with the help of gravitational lensing, the researchers were able to get an up close and personal view. The phenomenon occcurs when the gravity of a massive foreground object warps space into a giant cosmic lens, causing distant background objects to appear both brighter and more focused. Since SPT2319-55 is located behind the gravitational field of a different, much closer galaxy, researchers were able to see it in much greater detail than would have otherwise been possible.

When new stars are born in these young galaxies, the dust and gas that surrounds them heats up and emits infrared light. And when galactic winds pass by them, their infrared light temporarily illuminates the breeze, allowing high-powered instruments like ALMA to see what elements are inside of them. When ALMA zoomed in on SPT2319-55, it was able to see spontaneous bursts of winds shooting outward at nearly 500 miles (800 kilometers) per second. And thanks to its ability to detect molecules at millimeter wavelengths, it picked up faint signatures of hydroxyl in the wind — a prominent gas found in rapid star-forming regions. “So far, we have only observed one galaxy at such a remarkable cosmic distance, but we’d like to know if winds like these are also present in other galaxies to see just how common they are,” said lead researcher Justin Spilker, an astronomer at the University of Texas at Austin, in a press release. “If they occur in basically every galaxy, we know that molecular winds are both ubiquitous and also a really common way for galaxies to self-regulate their growth.” Researchers aren’t exactly sure where these winds originate from, but they think that they’re probably blasting from supernova explosions, which are known to trigger rapid star formation, or are shooting from supermassive black holes as they accumulate nearby gas. Even if we don’t fully understand the self-regulation process yet, the fact that galaxies could be controlling their star formation and galactic destinies is pretty remarkable.