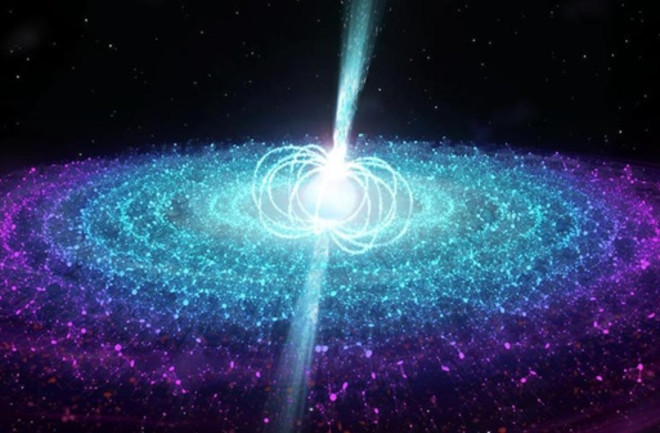 A narrow beam shoots out matter at nearly the speed of light in this artist's concept of the neutron star Swift J0243.6+6124, which is the first highly magnetic neutron star known to house such a powerful jet. (Credit: ICRAR/University of Amsterdam) For the first time, astronomers have witnessed a fast-moving jet of material shooting outward from a neutron star with an extremely powerful magnetic field — one that is some 10 trillion times stronger than the Sun's. The surprising discovery not only caught researchers off guard, but is also forcing them to fundamentally rethink their current theories regarding how jets form throughout the cosmos.

Astronomers have long been fascinated with neutron stars, which are the superdense cores left behind after a massive star explodes in spectacular fashion. These extreme stars are so compact that if our Sun were compressed to the density of a neutron star, it would only be about 10 miles wide (for comparison, the Sun is roughly 850,000 miles wide). With so much matter packed into such a tiny space, neutron stars have intense gravitational pulls near their surfaces that are only rivaled by black holes, which can lead to some pretty interesting effects. In a new study, published yesterday in the journal Nature, a team of researchers used a radio telescope called the Karl G. Jansky Very Large Array (VLA) to observe and analyze one bizarre neutron star named Swift J0243.6+6124 (SW J0243). This object was was first discovered thanks to an unexpected and bright outburst that was captured by NASA's Swift space telescope in October 2017.

The binary system Swift J0243.6+6124 is made up of a neutron star and a more massive companion star orbiting each other every 27 days. As the neutron star passes near its partner (as shown in this artist's concept), it pulls material into a disk around it. (Credit: ICRAR/University of Amsterdam) By monitoring how the object's X-ray and radio emissions evolved following the outburst, the researchers were able to determine the neutron star is likely stealing material from a massive, nearby companion star and condensing that material into a swirling disk called an accretion disk. In turn, interactions between the accretion disk and the neutron star's magnetic field lines lead to the production of powerful jets at the neutron star's poles, which spew out matter at nearly the speed of light. The fact that a neutron star is home to such jets is not a surprise in and of itself. "We've seen jets coming from all types of neutrons stars that are pulling material from their companions," said lead author Jakob van den Eijnden of the University of Amsterdam in a press release. "[But] never before have we seen a jet coming from a neutron star with a very strong magnetic field." https://www.youtube.com/watch?v=MKVb4vX2ADM

According to current theory, neutron stars with extremely intense magnetic fields like SW J0243 should not be capable of producing such jets. Our working theories — backed by decades of observations — suggest that extremely strong magnetic fields should overpower and prevent the formation of jets around neutron stars. But according to van den Eijnden, "Our clear discovery of a jet in SW J0243 disproves that longstanding idea." However, as the authors note in their paper, there is still much more work to be done. Before they are able to eliminate all other possible explanations for the apparent jets — which range from intense stellar winds to shock waves within the accretion disk — they need to gather more observational evidence to prove the jets really do exist. But, according to co-author Nathalie Degenaar, if their findings hold up (or more jets are observed around other strongly magnetized neutron stars) "This discovery not only means we have to revise our ideas about jets from such systems, but also opens up exciting new areas of research." [This article first appeared on Astronomy.com]