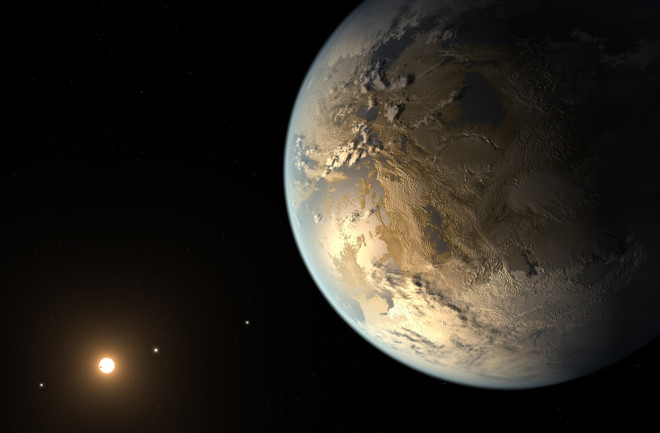 Kepler-186f, shown in this artist's concept, is the first Earth-sized planet discovered in its star's habitable zone. Credit: NASA Ames/SETI Institute/JPL-Caltech Exoplanets are fun and all, but those hot Jupiters and super Neptunes and such are kind of beside the point. Everyone knows the real search is for a planet like ours: rocky, smallish, and capable of hosting liquid water. And now scientists have found one, named Kepler-186f — an Earth-sized planet in its star's habitable zone, the area where conditions aren’t too hot or too cold, but just right, for liquid water to be possible.

The planet orbits a star about 500 light-years away called Kepler-186 and was discovered by the Kepler telescope (and then confirmed at the Keck and Gemini Observatories). The discovery technically includes four other exoplanets found around the star, but Kepler-186f is the only one in the habitable zone. Scientists found them all using the “transit method,” which is just basically looking at stars and waiting for planets to pass in front, dimming the star’s light a little bit. From that little bit, they can determine a lot. Not only is it exciting that Kepler-186f is in the habitable zone, but researchers also learned that it’s very close to Earth-sized: about 1.1 times as wide. It also takes about 130 days to orbit its star, making its year just over a third of ours. Put that all together, and its likely Kepler-186f is a rocky world like Earth or Mars, since it’s not big enough to hold on to a huge atmosphere (like a gas giant). The results are published in this week’s edition ofScience.

The Kepler-186 planetary system includes four planets besides Kepler-186f (all Earth-sized or smaller), and all orbit closer to their star than Mercury does to our own. Credit: NASA Ames/SETI Institute/JPL-Caltech

Before we get too carried away, though, it’s important to remember the context of this discovery. For starters, Kepler-186f is a lot like Earth, but it’s not a true analog because it orbits a star very different from the sun. Kepler-186 is an M dwarf, a kind of star much smaller and dimmer than our own. M dwarfs are great for exoplanet hunters because they are super common (about 75 percent of the normal stars in our galaxy) and burn steadily for billions of years. But Kepler-186 is only about 47 percent as large as our sun, and Kepler-186f only receives about 32 percent of the solar energy that Earth gets. (It’s still in the habitable zone because its orbital distance is also a lot smaller, about 30 percent of Earth’s.) Also, just because a planet is in the habitable zone doesn’t mean it has liquid water. As the paper’s abstract puts it, “If Kepler-186f has an Earth-like atmosphere and water at its surface, then some of this water is likely to be in liquid form.” That’s two big ifs: they’re possible, maybe even likely, but we don’t know the answers for sure. And, sadly, the system is too dim and distant for subsequent observations to tell us much more. Still, the important thing is that we keep getting closer to finding an actual Earth-twin out there. Of some 1,800 exoplanets we know about, only about 20 orbit in their stars’ habitable zone, and only one (now) is Earth-sized and likely rocky to boot. But as those numbers keep going up, it might just be a matter of time before we find one that has everything we want on it — even, possibly, life.