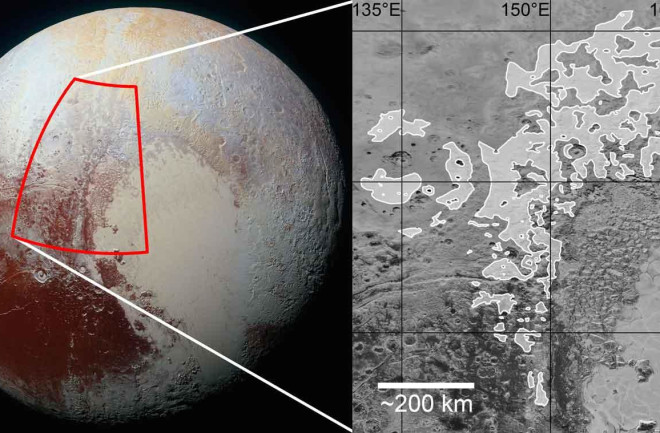 Sputnik Planitia on Pluto, where strange ridges can be found. (Credit: NASA/Applied Physics Laboratory/Southwest Research Institute/O. White) Scientists have traced strange landforms on Pluto back to their ancient glacial origins. A letter by SETI Institute scientist Oliver White and colleagues shows how ridged landforms on Pluto provide evidence for glaciers on the dwarf planet some 4 billion years ago. Their research targeted the landscape that borders the ice-covered impact basin Sputnik Planitia - the western portion of Pluto's "heart." It has noticeable ridges that can’t be explained by any simple terrestrial or planetary process, according to a statement.

White and his team noticed the subtle, but bizarre ridges when surveying images of the dwarf planet taken by NASA’s New Horizons spacecraft, which passed by Pluto in 2015. And they mapped and analyzed the shape and dimensions of these ridges, as well as their distribution, to find out where they came from.

The maps and images revealed two different types of ridges bordering Sputnik Planitia: washboard and fluted. Washboard ridges exist in flat areas like valley floors and basins. Fluted ridges, however, exist in steeper areas like the crater walls that separate basins and valleys. These fluted and washboard ridges also coincide with a major tectonic system at the edge of Sputnik Planitia. In piecing together the ridges' history, the researchers found that their formative events happened about 4 billion years ago after Sputnik Planitia was created in a massive impact. The area's low elevation suggests that there were nitrogen ice glaciers in the past and the Sputnik Planitia basin acted like a big bowl that the nitrogen ice migrated into, White said. They found that water ice debris was buoyant in denser pits of glacial nitrogen ice. This nitrogen ice then receded into surface pits where ice sublimated, or turned directly into gas. This process left behind the water ice debris behind as the ridges. “Pluto has opened our eyes to how geology can operate at the farthest reaches of our solar system,” White said. “This is another instance of Pluto exhibiting its fascinating geology,” White added. The research was published by the journal Nature Astronomy.