Pluto at the top of the key

Astronomer Mike Brown is a friend of mine. He's a pretty nice guy, and while he's not exactly sad that he was instrumental in getting Pluto demoted from its planethood status -- his Twitter handle is @PlutoKiller, after all -- I don't think he deserves all the slings and arrows he's received. 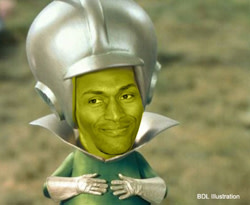 And he certainly doesn't deserve an elbow to the nose, as LA Laker Ron Artest recently said. I can understand Mr. Artest's lament at some level, but physical punishment will only redouble Mike's efforts, and who knows what will happen then! We might lose Neptune. So if I had to think of suitable punishments, they'd be 1) a pie to the face, 2) a Benny Hill-style rapid-repeat slap on the top of the head, 3) a dressing down by Goofy, or just possibly 4) more telescope time. I don't think he'd disagree with any of these, with the exception of getting a pie to the face before more time on a telescope. Whipped cream is hard to get off a 10-meter mirror. Tip o' the nose guard to Jerome Clemente. Image credit: Ball Don't Lie.