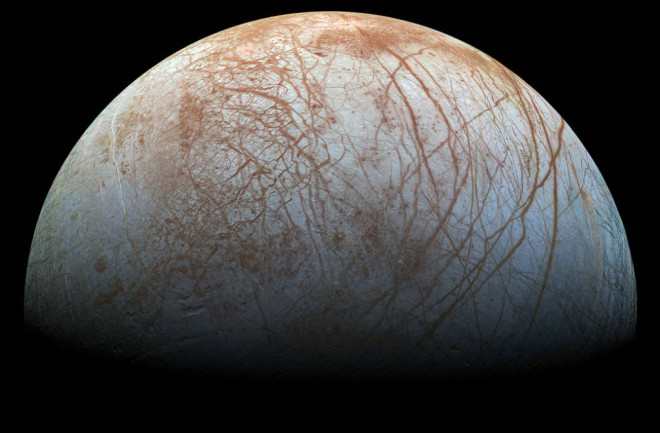 (Credit: NASA) On Earth, the theory of plate tectonics describes the way large pieces of the planet’s crust move and interact. These pieces, or plates, slide over the mantle, the malleable outer layer of Earth’s core. Now, new research indicates that the frozen surface of Europa, one of Jupiter’s four largest moons, may also experience plate tectonics. If so, this process could be a way to transport materials — such as nutrients for life — to the liquid water ocean just beneath the moon’s icy crust. The work, published in the Journal of Geophysical Research: Planets on Monday, showed via computer models of Europa’s ice shell that a process called subduction, in which one tectonic plate meets and slides beneath another, is possible on the moon. The models’ results fall in line with prior work showing that regions of Europa’s surface appear to be expanding, making them appear much like mid-oceanic ridges on Earth and also suggesting that plate tectonics is at work. “What we show is that under reasonable assumptions for conditions on Europa, subduction could be happening there as well, which is really exciting,” said lead author Brandon Johnson of Brown University in a press release. It’s so exciting, he continued, because “If indeed there's life in that ocean, subduction offers a way to supply the nutrients it would need.” When subduction happens on Earth, it’s because the crust is cooler and denser than the mantle. This causes plates to sink, sometimes deep within the mantle. On Earth, the crust and mantle are composed of rock, but on Europa, the moon’s shell is made of ice. Though there is evidence that Europa’s shell is bi-layered, with the coldest and densest ice on top, any ice plate that began to sink beneath another would warm up, fall in density, and stop, leaving scientists to wonder whether subduction was really possible. The model used by Johnson and his class of graduate students at Brown shows, however, that subduction can still continue if the outermost ice shell incorporates salts, which are denser than ice. Even if a slab warmed up as it sank, reducing its density somewhat, the added density of the salt would allow it to continue sinking. “Adding salt to an ice slab would be like adding little weights to it because salt is denser than ice. So rather than temperature, we show that differences in the salt content of the ice could enable subduction to happen on Europa,” Johnson said. But is that explanation likely? As it turns out, yes — scientists have observed evidence on the moon’s surface of upwelling water from below the ice shell, much like magma wells up from vents on Earth. That upwelling water should leave behind a high concentration of salts. Furthermore, potential cryovolcanism could literally spray the surface with added salts. However the salts reach the surface, one thing is clear — if they allow subduction to happen, then Europa’s likelihood as a potential habitat for life just got better. The moon also could become a proxy to allow geologists on Earth to learn more about our own planet. “If we can now study plate tectonics in this very different place, it might be able to help us understand how plate tectonics got started on the Earth,” added Johnson.