Planet Nine: A New Addition to the Solar System? 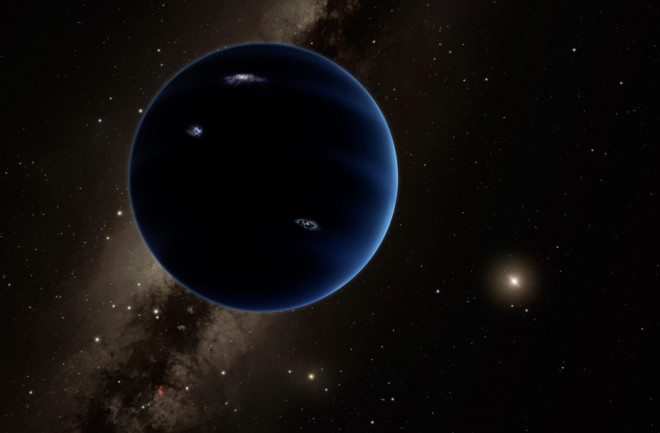 An artist's rendering of what Planet Nine may look like, with the Sun in the distance. (Credit: Caltech/R. Hurt/IPAC) Elementary science courses have provided a pretty firm grasp of what the solar system looks like. The map, currently, details eight planets and one former planet. But our planetary neighborhood is much larger and more populated than we might think, with dwarf planets, trojans, and maybe even super-Earths orbiting far beyond Neptune. Now, new evidence may provide the most solar-system-shaking revelation in well over a century. Two researchers from the California Institute of Technology have discovered evidence for a massive planet orbiting the sun far beyond Neptune. Using mathematical and computer models, Michael Brown and Konstantin Batygin looked at objects behaving strangely in the Kuiper belt, a region beyond the eight planets filled with minor planets similar to Pluto, asteroids and other rocky bodies of varying sizes. They concluded that another planet, which they call “Planet Nine,” must be responsible for these peculiarities. They reported their findings Wednesday in The Astronomical Journal, an open-source publication.

Building on a Theory

Brown and Batygin built upon the findings of a 2014 paper by a separate team of astronomers. That team discovered an object roaming beyond Neptune with an unusually elliptical orbit, similar to that of the previously discovered minor planet Sedna. They nicknamed their discovery "Biden," after the vice president, and put forth the idea that the gravitational pull of a large planet could be responsible for the object's orbit. Further research by Brown and Batygin showed that at least six objects, including Biden and Sedna, as well as other, smaller bodies, followed similarly aligned oval-shaped orbits. This behavior could not be explained by current models of the solar system and offered strong evidence that an unknown force was at work. In their current study, Brown and Batygin used computer simulations to work through the various possibilities to explain the peculiar orbits. They considered, and then discarded, scenarios where the gravitational pull of the Kuiper belt itself was responsible for the odd orbits. Also rejected was the theory that a large planet could be encircling all of the objects and influencing them from the outside. They inserted planets of different sizes into their projections, and found that the only way to describe the six Kuiper belt objects' behavior was a body substantially larger than Earth on a long orbit around the sun passing through the Kuiper belt.

An illustration of the orbits of the six minor planets the researchers looked at, as well as the predicted orbit of Planet Nine. (Credit: Caltech/R. Hurt/IPAC) “The aligned orbits in the Kuiper belt, the peculiar orbit of Sedna, the strange perpendicular population of objects, all of these things are naturally tied together by introducing Planet Nine into the solar system,” says Batygin. What solidified their theory was the prediction that these objects should follow an orbit perpendicular to that of the rest of the Kuiper belt — something a quick search through Harvard's Minor Planet Center database confirmed. After working through their models, the researchers say that they are very confident in their predictions. There is only a .007 percent chance that the observed orbits are random, they say, and their models have eliminated all other possibilities. “We have successfully tied a number of puzzling features that are observed in the Kuiper belt into a single unifying story,” says Batygin. “I think that this is quite a promising explanation for a number of things.”

A Good Guess, But a Guess Nonetheless

To be clear, no new planet has been found yet. Brown and Batygin are only making an educated guess based on their knowledge of how planets interact with each other. The use of gravitational anomalies to find planets is far from unprecedented, however. Neptune was discovered in the mid-1800s after mathematician Urbain Le Verrier predicted its existence based on anomalies in the orbit of Uranus.

If it does indeed exist, Planet Nine is roughly 10 times as massive as Earth and travels on an orbit that takes it around the sun only once every 10,000 to 20,000 years, according to Batygin. It likely formed around the same time as the rest of the gas giants, but was booted out of the solar system by gravitational interactions with other planets. Something, however, stopped its flight, perhaps a nearby star, and left it in a long, cold orbit around the sun. That orbit could take it 1,200 times further away from the sun than Earth at its furthest points. A long and extremely distant orbital period could explain why Planet Nine hasn’t been spotted in the sky yet. At those distances, it would be nearly invisible. Still, Planet Nine won’t enter into our textbooks until we have definitive, visual proof. And until then, its existence is far from certain. According to Alan Stern, the principal investigator of the New Horizons mission, predicting new planets isn't exactly new. If history is any indication, there's little reason to strike up the band for Planet Nine's welcome party. “[The presence of additional planets] has been said in previous papers for at least 20 years, and none of those predictions have panned out yet,” says Stern. “This is not qualitatively different.” Stern says many of those papers also rely on gravitational anomalies to identify planets, but no attempts have thus far been successful.

The orbits of the six planets seen in relation to the Kuiper belt. (Credit: Caltech/R. Hurt/IPAC)

It Could Be a Lot of Things

Stern said he believes there are a wide range of explanations for the odd behavior of Kuiper belt objects. While it could be a new planet, he says it could also be other kinds of objects, random chance, or even measurement errors. Stern says he is waiting on a peer review of their findings to pass any judgment, and is still not certain anything is out there. Batygin acknowledges that their paper presents no definitive proof of an additional planet. Still, to him, the simulations are sound. “Until Planet Nine is caught on camera, it remains a theoretical prediction. But as far as theoretical models go, I believe that this is quite a compelling one,” he says. Their future research will focus on obtaining direct proof of Planet Nine by using Earth-based observatories such as the Subaru Telescope in Hawaii. Batygin also wants to continue to refine their theoretical model by researching other objects in the Kuiper belt that may be under the gravitational sway of a distant planet. This would allow them to make more accurate predictions about the orbit of such a planet.