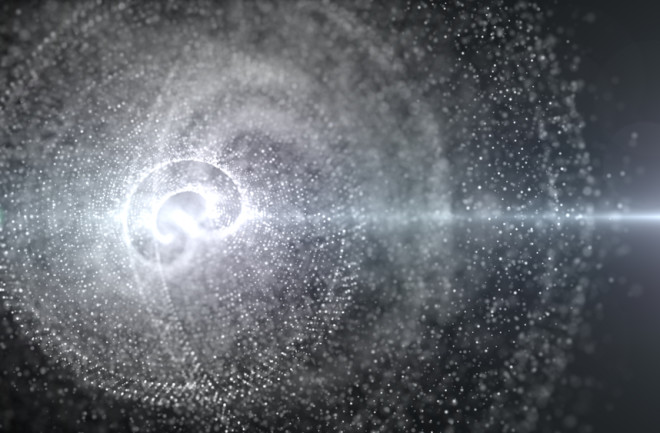 Dark matter particles may sometimes collide with the nucleus of a normal atom, creating trails that scientists could detect. (Credit: Color4260/shutterstock) In the elusive hunt for dark matter, some researchers are looking underground. The mysterious, unseen substance makes up more than 85 percent of the material in our universe. And since dark matter doesn’t interact much with normal matter (that's what makes it “dark”), scientists usually rely on extremely large detectors to maximize their chances of observing a signal. But the physical hunt for dark matter is relatively new, so these experiments have only been running for a few years. Now Stockholm University researcher Andrzej Drukier and his team say that there’s another way. They want to hunt for small rocks with evidence laid down over a billion years. In a new paper, published February 26 in the journal Physical Review D, Drukier's team says that trading physical area for a massively longer timescale may make for an even more sensitive experiment.

In many dark matter searches, researchers look for signals given off when a dark matter particle collides with the nucleus of a normal atom. These detectors are usually buried deep underground in massive tanks of cryogenically cooled liquids that isolate them from any interference. Here, researchers are looking for trails that the rare interactions might leave in the supercold detector's fluid – so far unsuccessfully. But rocks are also buried deep underground, and have been for millions of years. And researchers claim that these dark matter particle interactions might leave the same kinds of trails in rocks. But because a rock is not an advanced detector itself, researchers would need to examine the rock’s entire structure, in and out, to find trails about 100,000 times narrower than a piece of human hair, and the length of a red blood cell. Fortunately, technology is at the point where this is actually possible, at least for small rocks weighing a gram or so, the scientists say. While researchers haven’t found the coveted signals imprinted on rocks as dark matter fossils just yet, neither have any of the advanced cryogenic searches. So perhaps it’s time for dark matter detectives to get out their shovels and start digging.