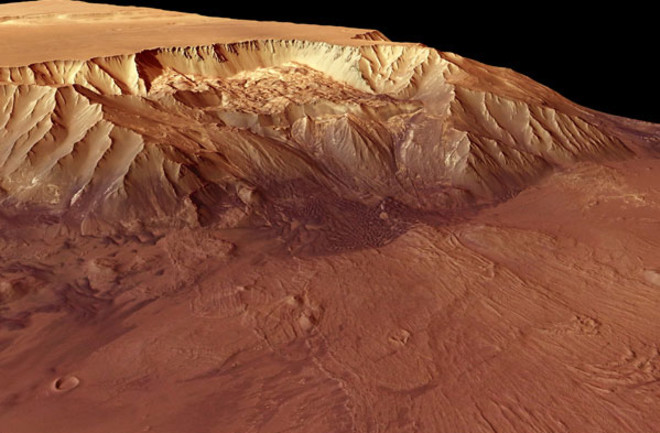 OK, Mars wins this contest for bragging rights. The photo above shows the Melas Chasma on Mars, which reaches a depth of 5.6 miles; it's part of the staggering the Valles Marineris rift valley, which stretches almost 2,500 miles across the surface of the red planet. For comparison's sake, our earthly Grand Canyon is 1.1 miles deep and 277 miles long. This remarkable image was taken by the High Resolution Stereo Camera on the European Space Agency's Mars Express orbiter. In addition to giving us something neat to gawk at, the image also reveals evidence of Mars's watery past.

Part of the canyon wall collapsed in multiple landslides in the distant past, with debris fanning out into the valley below. Scientists analyzing the texture of the rocks deposited by the landslides say they were transported by liquid water, water ice, or mud. [ScienceNOW]

80beats: Vast Ocean May Have Covered One-Third of Primordial Mars