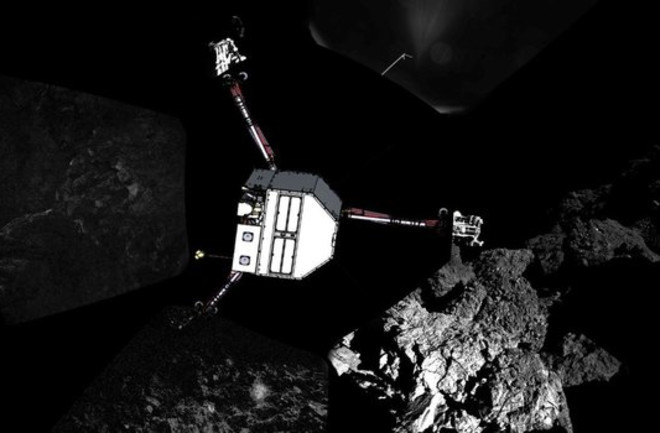 Rosetta’s lander Philae has returned the first panoramic image from the surface of a comet. Superimposed on top of the image is a sketch of the Philae lander in the configuration the lander team currently believe it is in. (Credit: ESA/Rosetta/Philae/CIVA)

Update: 4:32 p.m. Central Time: Philae has come through! The European Space Agency on Friday confirmed that it had reestablished stable communications with the lander. Philae is beaming back more data from the surface of Comet 67P/Churyumov-Gerasimenko.

Scientists also confirmed that they commanded Philae to rotate in order to expose its solar panels to more sunlight. If they can get Philae into more sun, the lander's batteries could be recharged and extend its mission. We'll have more on this story as information becomes available.  What a couple days it has been for Rosetta’s Philae lander. And although it’s been a thrill, it appears that the end is near for the little lander that could. That's because Philae bounced into the shadow of a cliff, and so it's unable to generate the electricity it needs to carry out its full plan of months-long observation. Today researchers are scrambling to conduct as many experiments and gather as much data as possible before Philae’s batteries die — likely sometime in the next 14 hours.

On Thursday we learned from the mission team that Philae overshot its preferred landing spot after bouncing off the comet’s surface on its initial touchdown. That left the lander in a strange position — in a shadow and perhaps dangling on the edge of a crater. Philae’s batteries had enough juice to power its instruments for about 65 hours, but that time is running out. Although the lander also sports solar panels to charge a second set of batteries, its location in a shadow may render those useless. Right now, scientists are just hoping to hear from Philae one more time. The lander’s X-ray spectrometer and drill were activated, but scientists aren’t sure if the drill actually worked. Results from those experiments would be sent in the next transmission from the lander, which is expected to come around 4 p.m. Eastern time Friday. However, that depends on how much energy is left in its batteries. “We’re all very tired because we have to keep improvising our operations,” said Valetina Lommatsch of the German DLR lander team.

During each 12-hour rotation atop Comet 67P/Churyumov-Gerasimenko, one of Philae’s solar panels receives about an hour and 20 minutes of sunlight, while the other two get sun for less than 30 minutes. There is some hope that a signal could be reestablished at an unknown point in the future even if the lander goes dormant — it could get a bit of a charge from its limited sunlight. Scientists have considered rotating the panels to receive more light, or even using Philae's springy landing feet to jump to a new spot on the comet. But primary focus seems to be on using the final energy reserve to gather as much data as possible. To a large extent, they’ve succeeded. The lander’s ten instruments have gathered between 80-90 percent of the information the craft was designed to collect, said lander manager Stephan Ulamec. “Operationally, we’re extremely happy with how the mission has gone,” Lommatsch said. “Every instrument got a chance to do a measurement.”