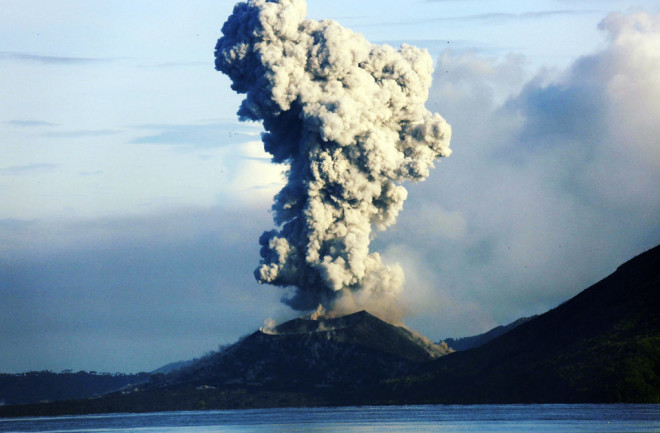 Mount Tavurvur erupts in Rabaul in eastern Papua New Guinea on August 30, 2014.NESS KERTON/Getty Images I don't tend to write much about Papua New Guinea, but the volcanoes of the island nation have produced some of the largest eruptions in the past few millennia. Dakataua, Pago, Billy Mitchell all produced VEI 5 or greater eruptions in the last 10,000 years, while Rabaul, Tavui, Ulawun, Lolobau, Lamington, Karkar, Manam and Long Island have all experienced numerous VEI 4 eruptions over that timespan. Some of these volcanoes are spectacular calderas that have been the source of massive eruptions. Rabaul and Tavui are partially submerged calderas, while Karkar have massive summit calderas measuring over 5 kilometers across. Long Island (not the New York one) has a 10 by 12 kilometer caldera (now filled with a lake) formed from three explosive eruptions over the past 16,000 years. Pago is only part of the larger Witori caldera that was formed from a series of explosive eruptions that all occurred in the 5,600 years. Even Billy Mitchell, which "only" has a 2-kilometer wide caldera at the summit, has produced multiple explosive eruptions in the last 900 years that blanketed half of Bougainville Island with ash and volcanic debris. If you wanted to pick an area of Earth where you might expect the next, big caldera eruption, you might be hard-pressed to find anyplace with more potential than Papua New Guinea. More recent eruptions of Rabaul and Lamington in the 20th century caused significant death and damage. The latter erupted in 1951 and generated devastating pyroclastic flows that killed over 3,500 people and wiped the town of Higataru clean off the map. The ash plume from the eruption may have reached 12 kilometers (40,000 feet) and the shocks from the blasts were felt in Port Moresby, over 110 kilometers (70 miles) away. Even as destructive as this eruption was, it appears that it was triggered by a relatively small collapse of a lava dome that had formed on Lamington that produced an 0.2-0.4 cubic kilometer debris avalanche and an ash plume that collapsed to generate the pyroclastic flows that travelled 15 kilometers (~9 miles) from the volcano. Recently, local people are beginning to resettle in the area that was devastated by the 1951 eruption, which is troubling considering how this style of eruption could easily happen again at Lamington. Rabaul city is located within the caldera of the same name. This means that people need to live side-by-side with a volcano that has produced at three VEI 4+ eruptions in the last 100 years. A number of the most recent explosive eruptions from Rabaul have involved multiple cones around the volcano erupting simultaneously, so planning how to deal with those multiple volcanic hazards is an especially large challenge for volcanologists. However, the government and people of Papua New Guinea have learned from the earlier eruptions in the 1930s-40s that killed over 500 people. They developed volcanic hazard plans and practiced evacuations so that the 1994 eruption of Rabaul caldera did not have large loss of life, even thought Rabaul city had to be effectively abandoned during the eruption. The Rabaul Volcano Observatory works to monitor the rumblings of the caldera and keep people aware of its danger. Even since the 1993 eruption, Rabaul has been restless, with occasional bouts of ash production Times are quieter right now in Papua New Guinea. Langila, Bagana and Ulawun had intermittent ash plumes over the last week that sent ash and volcanic gases 2-3 kilometers up. Luckily, these eruptions weren't much of a danger to the people living near the volcanoes. However, they should be reminders that the volcanoes in Papua New Guinea might be some of the most dangerous in the world, both to the people who live near them and the potential for a massive eruption that could have a global impact.