Our Nearest Neighboring Planet May Have a Sister World 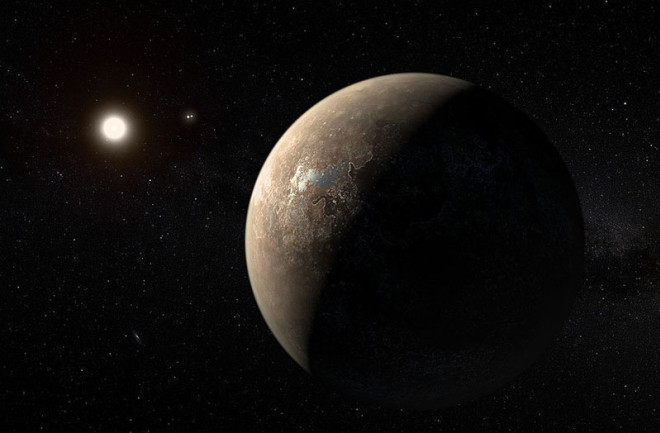 An artist's impression of Proxima b. (Credit: ESO) Proxima Centauri b may not be alone out there. The 2016 announcement of Proxima Centauri b was a watershed moment in exoplanet research. Not only had researchers found a potentially habitable Earth-mass planet, but it was at the nearest star to Earth. This means it could be one of the easiest systems to study using future telescopes. But researchers are now looking into some promising signals suggesting there are more planets lurking in the system. Indeed, such a companion was suggested in the initial results published in Nature in 2016, but the signal was of poor quality. “A second signal in the range of 60–500 d was also detected, but its nature is still unclear due to stellar activity and inadequate sampling,” the original paper stated. A post on Red Dots by Mikko Tuomi further delves into this detection. The period seems to be roughly 215 days, give or take. This would be far outside the 83 day rotational period of the star, meaning it’s unlikely to be caused by something in Proxima itself. Such an orbit would place it far, far outside the habitable zone. The current estimate is about 3.3 Earth-masses, making it a large rocky body—if it exists. The Red Dots project recently kicked off, growing out of the Pale Red Dot project that found Proxima b. While still interrogating the Proxima Centauri system, it is also looking for planets around Ross 154 and Barnard’s Star, two nearby small stars. From 1963 to 1973, Barnard’s Star was believed to have at least one planet around it, but subsequent observations ruled that proposed gas giant out. It may take a bit of work to draw out Proxima Centauri c from hiding — Prox b doesn’t pass in front of its star from our perspective, so the researchers have to rely on the radial velocity method, which looks for subtle shifts in a star’s spectra related to a planet tugging on its stellar home. If it’s found to be true, it could open the door to finding an entire solar system right next door.