Our Closest View Yet of Ceres' Bright Spots 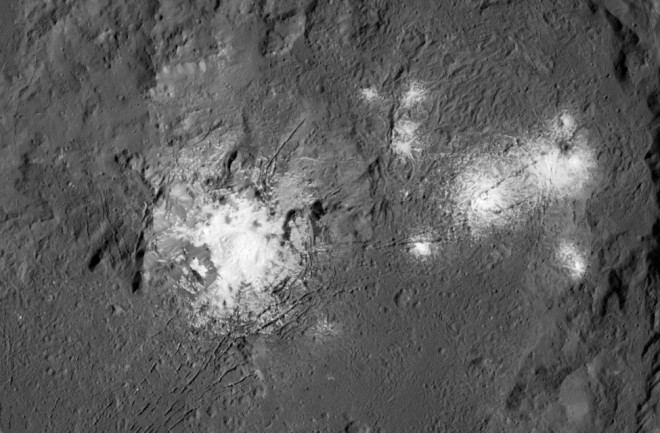 Dawn's close-up view of Ceres — 240 miles from its surface — reveals a dome in a smooth-walled pit in the bright center of the crater. (Credit: NASA/JPL-Caltech/UCLA/MPS/DLR/IDA/PSI) Since April 2015, NASA’s Dawn spacecraft has been drawing ever closer to Ceres, and it’s now provided the closest view yet of the dwarf planet. Scientists on Tuesday unveiled images captured by Dawn from it lowest orbit at Ceres—some 240 miles above its surface—during the Lunar and Planetary Science Conference in Texas. The latest set of images brings Ceres’ puzzling bright spots into sharper focus.

A wider view of the Occator Crater. (Credit: NASA/JPL-Caltech/UCLA/MPS/DLR/IDA/PSI) The brightest area on Ceres is in the middle of the 57-mile-wide, 2-mile-deep Occator Crater. From afar, it looked as if the crater contained two, distinct spots. But as Dawn has orbited closer, its captured images that have revealed bright areas that are far more intricate than previously thought. The latest close-ups show that one of the “spots” is a dome at the center of the pit, with fractures and other linear features crisscrossing over its top and sides. The deformities suggest the area was geologically active in the recent past.

An enhanced color image from NASA's Dawn spacecraft highlights subtle color differences on Ceres' surface. (Credit: NASA/JPL-Caltech/UCLA/MPS/DLR/IDA/PSI/LPI) "Before Dawn began its intensive observations of Ceres last year, Occator Crater looked to be one large bright area. Now, with the latest close views, we can see complex features that provide new mysteries to investigate," Ralf Jaumann, planetary scientist and Dawn co-investigator at the German Aerospace Center in Berlin, said Tuesday. In a study published in the journal Nature back in December, researchers crunched data from Dawn and concluded that Ceres’ spots are likely caused by hydrated magnesium sulfate — similar to Epsom salt — that’s present at the bottom of craters.