Our Black Hole Lights Up

The cloud of gas and dust venturing toward the center of our galaxy will be stretched and shredded by our local black hole. 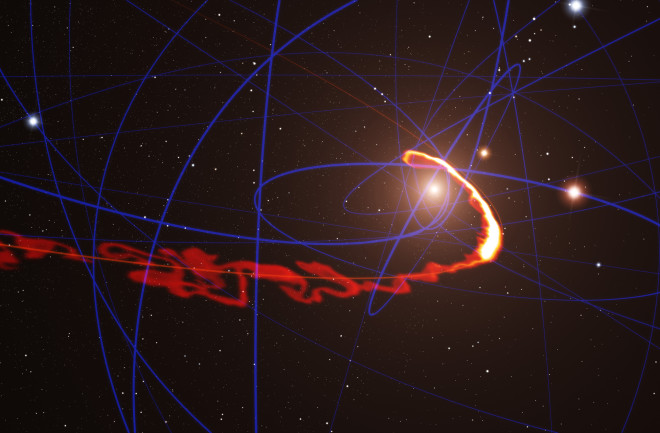 G2, a gas cloud, wanders too close to our galaxy’s central black hole in this illustration. | ESO/S. Gillessen/MPE/Marc Schartmann

The shadowy area around the supermassive black hole in our galaxy’s center may light up this year, as it shreds G2 — an interloper that is either a cloud of gas and dust or a star cocooned in such a cloud — which ventured too close. Black holes are virtually invisible unless they’re actively destroying something.

Our black hole’s violent meeting with G2 began last year, and as it continues, it should give astronomers a chance to peer inside the galactic center — the neighborhood around the black hole — rather than just simulate the swirling disc of gas and dust surrounding it.

“What a difference it is when you can watch!” says G2’s co-discoverer Stefan Gillessen, a scientist at the Max Planck Institute for Extraterrestrial Physics in Germany.

As G2 swings closer to the black hole’s event horizon — the point past which even light cannot escape — gravity has already stretched its leading edge into a ribbon more than 90 billion miles long, pulling it away from the tail, which isn't yet feeling the black hole’s full effects.

As gravity continues to tear G2 apart, its gas will be hotter than the sun’s surface and its dust hotter than melting lead. These high temperatures and the black hole’s extreme magnetic field will excite G2’s component particles, causing them to radiate and bathe the mysterious region in visible light, X-rays and radio waves.

G2’s light show could illuminate not only our hometown singularity, but also similar ones throughout the universe too distant to study.