OSIRIS-REx is Literally Overflowing with Asteroid Samples From Bennu

The spacecraft collected so much material from its target asteroid that it can’t contain it all. 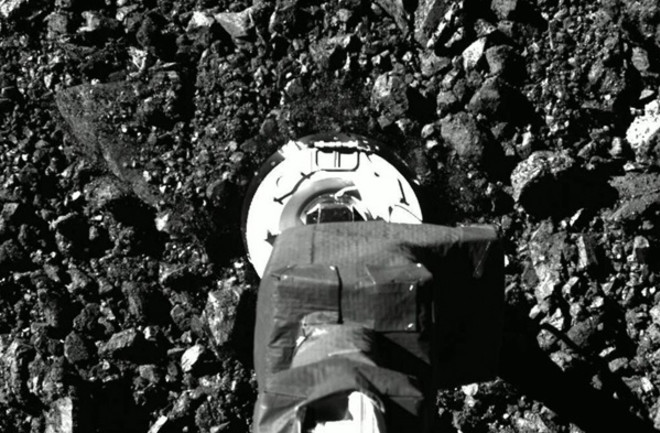 OSIRIS-REx is packing up to get ready to come home — but like a lot of travelers, it’s collected so many souvenirs that they won’t all fit in its luggage.

This highly relatable problem is a good one to have, though. It means the craft’s touch-and-go (TAG) sample collection attempt on Tuesday was a smashing success.

The craft navigated a boulder-strewn landscape down to the surface of Bennu, an asteroid more than 200 million miles (322 million kilometers) from Earth. The spacecraft's cylindrical sample collection head, mounted to a robotic arm, pressed into the regolith — the surface layer of dust and rocks — for six seconds. Meanwhile, it fired a canister of nitrogen gas, which whisked material into a collecting area inside the rim of the sample head.

OSIRIS-REx (short for Origins, Spectral Interpretation, Resource Identification, and Security-Regolith Explorer) documented this feat in a spectacular video. As it approached the landing site, the craft's nitrogen canister and retrorockets kicked up a cloud of rubble.

“I must have watched it about 100 times last night before I finally got a little bit of shuteye,” said Dante Lauretta of the University of Arizona, the mission’s principal investigator, at a press conference on Wednesday. That night, he said, "I dreamed of a wonderworld of Bennu regolith particles floating all around me.”

On Thursday, mission engineers moved the head of OSIRIS-REx's Touch-and-Go Sample Acquisition Mechanism (TAGSAM) in front of the craft's cameras to evaluate their asteroid haul. Rocks were plainly visible inside the collection head — at least 400 grams (almost 0.9 pounds), they estimate.

But the team also saw something concerning: the mylar flap meant to seal those precious rock samples is stuck open. A handful of Bennu particles just a few centimeters wide are wedged between the flap and the sample head's inner rim. Furthermore, timelapse imagery shows that some invaluable pebbles are escaping into space.

It appears the TAGSAM head is stuffed full and literally overflowing.

In one sense, that's good news. It means OSIRIS-REx collected even more material than is visible — perhaps up to two kilograms (4.4 pounds). “It’s very exciting, very surprising, but overall excellent news,” Lauretta said at a press briefing on Friday, October 23, which NASA announced with less than an hour of advanced notice.

Still, the fact that these samples are leaking out is an unwelcome development. “It's more than I'm comfortable with,” Lauretta added. “I was pretty concerned when I first saw these images.”

These events have injected a new sense of urgency into planning the mission's next steps. The team is currently working to stow the sample collection head inside OSIRIS-REx’s secure Sample Return Capsule, which they want to do as soon as possible to minimize how much material they lose. “We are in a contingency situation we didn't expect,” said Lauretta. “We were almost a victim of our own success here.”

The team had originally intended to take their time weighing their sample and deciding the craft’s next steps. The plan was to get a precise mass measurement of the total haul on Saturday by slowly spinning the spacecraft and measuring the change in its moment of inertia. But the team canceled that maneuver to avoid jostling more loose material out of the open flap. They expect they could begin stowing the sample as early as Tuesday, but it might take up to three days.

In the meantime, the craft's sample head will likely continue to shed material as its moved into the capsule. The team thinks they already lost up to 10 grams of material when TAGSAM was moved into position for the photo shoot. Lauretta expects up to “tens of grams” more could be lost during the stow procedure.

“I don’t see a way out of that,” he said. “I think we have to accept that and reoptimize.”

The mission team is currently working to revise their stow procedure to ensure it's as gentle as possible. But with an estimated 400 grams (0.9 pounds) of asteroid samples inside the head, even a loss of a few tens of grams, the mission would still greatly exceed its target of 60 grams (0.13 pounds). Japan's Hayabusa 2 mission to asteroid Ryugu is expected to bring back a few tens of grams, so even if OSIRIS-REx loses part of its haul, it'll still bring back the largest asteroid sample ever returned to Earth by a spacecraft.

Scientists hope scrutinizing the samples will yield insight into the formation of the solar system, as well as life on Earth. They expect to have Bennu's rocks in their labs shortly after the craft delivers them to Earth on September 24, 2023.

The team also expects to gain a wealth of knowledge about Bennu based on the images and data taken during the TAG attempt. For instance, researchers are currently working to identify and track individual particles within the rubble-cloud to understand their behavior in Bennu’s unique microgravity environment, said Lauretta.

When TAGSAM touched down, the craft’s momentum continued to carry it inside the asteroid, plunging its head about 19 inches (48 centimeters) into the surface. The regolith barely resisted the intrusion, too, simply flowing around probe. That was much deeper than the team simulated, and probably explains why the TAGSAM got so full of material in the first place, said Lauretta.