OSIRIS-REx Gets its First Close-up Photos of Asteroid Bennu 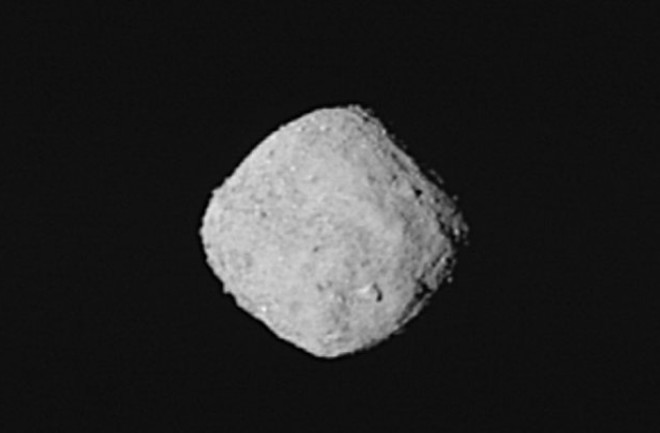 OSIRIS-REx images asteroid Bennu from just 200 miles (330 kilometers) away. (Credit: NASA/Goddard/University of Arizona) At long last, NASA’s Origins, Spectral Interpretation, Resource Identification, Security, Regolith Explorer (OSIRIS-REx) spacecraft has delivered an up close and personal view of asteroid Bennu. This composite image was created from eight shots taken by the craft’s PolyCam camera. Transmitting data back to Earth, researchers used a super-resolution algorithm to combine the photos and give us a never-before-seen look at the asteroid’s diamond shape and rocky terrain. The mission has been spent more than two years traveling toward the carbon-rich asteroid, and is now within just 200 miles (330 kilometers) of its target. “The first images that capture the entire asteroid are used for an important number of calibrations that are fundamental to correctly interpret the results obtained from higher resolution images using different color filters,” said Juan Luis Rizos García, a researcher at the Instituto de Astrofísica de Canarias (IAC) and part of OSIRIS-REx’s team, in a media release. Once the spacecraft arrives at Bennu in December, it will switch to its color-filter MapCam, which will map the asteroid and document its physical characteristics. The camera will also look for alteration in surface minerals that could have been caused by the presence of liquid water. Primitive Science OSIRIS-REx’s obligations go far beyond taking pictures, though. The mission, which embarked on its 1.1 billion-mile (1.77 billion km) round-trip journey in September 2016, will also search for orbiting satellites, or mini-moons, study its light spectrum to determine its composition and ultimately collect samples to bring back to Earth. Scheduled for July 2020, the craft will descend to a pre-selected landing site and use its Touch-And-Go Sample Acquisition Mechanism (TAGSAM) to contact the surface. In the span of just five seconds, the mission will shoot the surface with nitrogen gas and blast it into pieces small enough to take back to Earth. These samples will not only give researchers an untainted look at an asteroid, but they’ll also allow us to study our solar system’s formation and evolution. It’s thought that asteroids have more or less remained the same since they first formed in the early days of our solar system, and that they still house the organic molecules, volatiles and amino acids responsible for creating life on Earth. By probing asteroids, researchers could gain insight into these crucial elements and possibly track how they spread through our ancient solar system. And since previous observations showed that Bennu is rich in carbon, a prominent element in our solar system’s earliest asteroids, it makes for a promising, primitive target. But that’s not the only reason researchers decided to probe Bennu. Every six years, the asteroid comes within just 186,000 miles (300,000 km) of Earth — landing it on NASA’s list of potentially hazardous asteroids. Although the chances are slim, it’s possible that the 1,640-foot-long (500 meters) structure could impact Earth in the late 22nd century. Such an event would be far from catastrophic, but if you have the opportunity, you might as well eye up your competition. OSIRIS-REx’s results will come in only slightly behind those from JAXA’s Hayabusa2 mission, which arrived at asteroid Ryugu in June and will probe it until 2020. Combined with data from OSIRIS-REx, who will study Bennu until 2021, the time to decode asteroids and the history of our solar system could soon be upon us.