There was a somewhat funny, if stupid, comment below in regards to minority opposition to gay marriage:

This has to be one of most ignorant and race obsessed articles I have ever read. Since you are so blinded by race you decided to leave out the most determinative factors in ones opinion concerning sexuality. The fact of the matter is black people are products of being enslaved and socialized in the bible belt. Black people are actually more tolerant of homosexuality then there white counterparts from the same cultural/geographic areas. Compare black opinions on homosexuality to Scotts-Irish in Georgia, South Carolina, and Texas then we can have a conversation.

As I have pointed out before most of the black American opposition to gay is probably due to their propensity toward Christian fundamentalism, which is the most well developed of any American racial group (Asian Americans are the most secular).* In any case, is it true that blacks are actually more supportive than whites when you control for region? Let's look. Again, the GSS variable MARHOMO measures opposition or support for gay marriage. I limit to the years 2006 and 2008 (there was very little change in the sample in terms of opinion). Additionally I select only whites and blacks, and break it down by Census Region. Finally I discarded all regions where the number of blacks surveyed was < 50. I added together those who "disagree" and "strongly disagree" with gay marriage into one category, and plot them on a graph where the X axis are the regions where the sample sizes for blacks are relatively large. 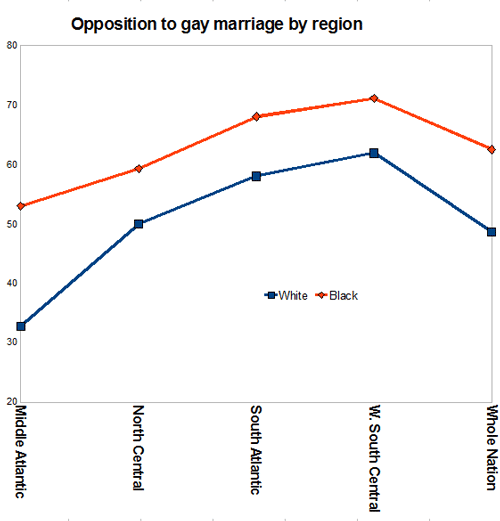 As you can see, the ignorant commenter was wrong. In all the regions with large sample sizes blacks oppose gay marriage more than whites do. But, regional culture obviously has an influence. It is important to recall that many northern blacks descend from those who emigrated from the South within the past 3-4 generations, so their cultural conservatism is probably a reflection of the South. But living in the North has shifted their viewpoints somewhat. So blacks who live in the northeast and Rust Belt oppose gay marriage a bit less than whites in some parts of the South. Also, I think that it is unfortunate that I had to discard the McCain Belt states, "East South Central," because of small sample sizes. This region of extreme cultural conservatism and racial polarization has exhibited relative black-white unanimity on social issues when I've poked around the GSS (other questions have larger sample sizes than MARHOMO). * Religion does not explain all the difference. I suspect this is due to the very small size of the nonreligious among American blacks, so that their milieu is still strongly flavored by conservative Christianity.