The biggest recent supernova revealed how stars live and die. 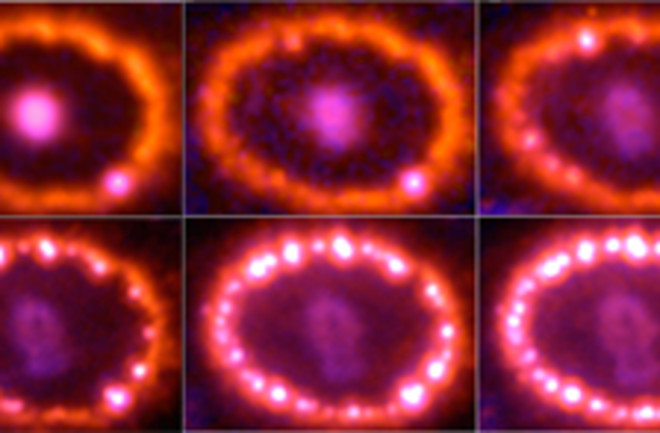 A ring surrounding Supernova 1987A, roughly one light-year wide, glows ever brighter as the blast of the explosion catches up with a cloud of slower-moving gas molecules—the  sloughed-off remnants of the progenitorstar’s atmosphere,  shed thousands of years earlier. Bright dots in these  Hubble images are relatively dense pockets of gas, heated so intensely they emit light and X-rays. | Courtesy of NASA/ESA/P.Challis/R.Kirshner (Harvard Smithsonian Center for Astrophysics)

Two decades after it lit up Earth’s southern skies, the exploding star known as Supernova 1987A is still putting on the fireworks. The first supernova of 1987 had astronomers in a tizzy because it was the brightest one seen since 1604—before the invention of the telescope. Instantly they started a global monitoring program, watching for every clue about how massive stars die. Now the Hubble Space Telescope has delivered the pièce de résistance, capturing the supernova’s blast wave as it sweeps into interstellar space, heating a surrounding ring of gas into a glowing cosmic rosary.

Before SN 1987A scientists appreciated only the broad details of what makes a supernova detonate: A giant star exhausts its fuel and collapses on itself, and the rebounding shock waves rip the celestial body apart in a nuclear inferno. Then on February 23, 1987, light from SN 1987A reached Earth, completing a 163,000-year journey from the Large Magellanic Cloud and bringing with it a panoply of surprises.

Supernova 1987A stands out among the stars of the Large Magellanic Cloud, one of the Milky Way's satellite galaxies, 10 years after its explosion. | Courtesy of Hubble Heritage Team/AURA/STScl/NASA

The first bombshell was that the wrong kind of star had blown up. In the textbook view, only red supergiants—the largest stars—could go supernova. But the progenitor of SN 1987A turned out to be a smaller, hotter kind of star called a blue supergiant. “Supernova 1987A was quite different from other supernovas because it was a compact star when it exploded,” says Harvard astronomer Robert Kirshner. “And of course there are other objects just like it that we now recognize.” That means supernovas may be more common than previously thought. After Hubble was launched, it spotted huge, faint ruby loops framing the supernova; their origin is still a mystery. Theoretical models predicted that the supernova should leave behind a neutron star (an ultradense stellar residue), but so far there is no sign of it.

The latest Hubble images of SN 1987A further boost astronomers’ appreciation of what a complex beast a supernova is. Remnants of the star’s outer atmosphere show up as lustrous red rings. “That’s an interesting detail because it tells you what the star was doing 10,000 or 20,000 years ago,” Kirshner notes. Before it died, the convulsing star apparently shed its gaseous aura, which then lit up after the explosion. First visible to Hubble 13 years ago, the rings continue to brighten as more of the blast hits them. Soon they will be bright enough to illuminate the star’s surrounding area like a campfire in the woods. The new Hubble pictures also reveal that the debris in the middle—the shredded star itself—is asymmetrical, confounding expectations. “This is a clue to the actual guts of the explosion,” Kirshner says. There’s also a peculiar glow in the center, believed to be energy released by a radioactive isotope of titanium created in the first second of the explosion. From this chemical signature, theorists can work backward to dissect the underlying physics of the blast.

The insights gained from studying SN 1987A have in turn helped astronomers better classify and model the 200 much fainter supernovas detected each year. Because supernovas are so powerful, they are visible even in distant galaxies, making them valuable tools for measuring the size and history of the cosmos. The challenge lies in calibrating their luminosity—and SN 1987A will help. Supernovas are also important to the life of the universe—and more specifically, to life in the universe. All of the heaviest elements in the cosmos (like Earth’s iron core) and half of the middleweight ones (like the oxygen and carbon essential to biology) were forged in the cauldrons of exploding stars. The fast-expanding remains of SN 1987A are seeding space with these vital elements even as we watch. “You literally are made of atoms that were created in supernovas,” says Kirshner. “So we ought to have a real interest in this stuff.”