On TV: A Tale of Two Red Planets 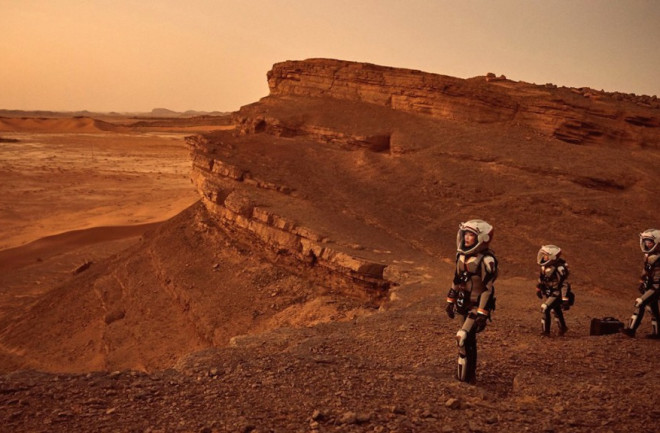 Are we there yet? Astronauts discover that landing on Mars is only the beginning of their journey in the dramatized half of the show. (Credit: National Geographic Channel) I'll confess, I came to Mars, the new National Geographic miniseries that debuted last night, with a good dose of skepticism. First of all, it is a half-drama, half-documentary blend, a hybrid mix that often ends up combining the weakest elements of both. Second, there is the matter of timing. The drama part focuses on the intense survival challenges facing the first crew of astronauts to land on Mars. Um, didn't we just see that in The Martian? The documentary part seems out of step as well, focusing on high-minded ideas about human spaceflight right at a time when the United States is being tossed about by dark political currents. So I'll come right to the point: Mars is a success. It paints a portrait of two Red Planets, a distant aspirational target in 2016 and an immediate world to explore and overcome in 2033. It explicitly embraces Elon Musk's vision of humans as a two-planet species (Musk is a frequent presence in the documentary portions), and it takes a long-horizon view of technological progress that we could really use right now. Much of that unshakeable optimism comes straight from executive producers Brian Grazer and Ron Howard, the guiding force behind Mars. I spoke with them to find out more about their inspirations for Mars the series, but also about their feelings regarding Mars-the-planet as the next step in our species journey into the final frontier. [For more astronomy and space news, including real developments on Mars exploration, follow me on Twitter: @coreyspowell]

You chose a potentially awkward format for Mars, combining a space-exploration documentary with an imaginary story of a 2033 mission to the planet. What made you decide to take both approaches at once?

Ron Howard: Mars actually began as a documentary and evolved into this half-scripted adventure story. We were very much inspired by what we were learning in the documentary portion of the series, in which we take a look at the tipping point we're at, and all that’s being done now to reinvigorate this drive outward into space. It happened in particular when we interviewed Elon Musk and heard his thoughts about Mars.

How did you find an effective balance between fact and fiction in Mars? It feels natural in the series, but I've seen how many ways that can go wrong.

Ron Howard: Brian was an early instigator in this regard. When the idea was floated that maybe we should dramatize part of this series, Brian immediately leaped to the idea it shouldn't be just snippets of dramatization, it should be characters and a real story. I remember Brian saying, "We can convey so much more with characters we’re invested in and a story that we can follow." It was about using the research, yes, but also using that as a springboard to create a drama that is authentic yet emotionally engaging. I remember he put it out in a meeting in a way that surprised me—the experimental side of it. Brian Grazer: Well, thanks! But we were really lucky to have good partners. We had Peter Rice [chief executive of Fox Networks Group], we’d done a lot of other television with him, including Empire and 24. I had lunch with him and I just one-sentenced our concept for Mars, and he got really excited. Having an enthusiastic partner is encouraging. And then Courtney Monroe [chief executive of National Geographic Global Networks], she too was very excited. With a project like this it’s not just about the people who say yes to you, it’s about the really smart people you collaborate with and learn from. In the documentary parts you talk to both NASA and private spaceflight experts. Which side do you see as more instrumental in making a Mars journey happen for real? Brian Grazer: There’s a common interest for all those people: NASA, Elon Musk, other space agencies. They all agree that space exploration is essential, getting to Mars is essential. Our research in talking to them makes me feel that is essential as well. And there are all these other related reasons why it’s important for America to be operating in this plane. Geopolitical reasons, for instance.

Brian Grazer, one of the executive producers on Mars, shows his true red colors. (Credit: Brian Grazer) The geopolitical value of space exploration seems obvious, but what else do you have in mind? Brian Grazer: Is it obvious? As Elon Musk put it very eloquently, the moment you when you can just about go—that’s the moment to really push ahead. Because if we could go and we balked, and then we did face some kind of catastrophe that made it impossible to go, or that even eliminated the human race...that would be a huge regret. Elon is an individual who wants to live without regret, even the possibility of it. So to him it’s all very logical. Pushing into space is also unifying. We can make people around the world understand that human beings can choose so much more than anyone had ever dreamed, and make science fiction fact in that really palpable, remarkable way. All these things are possible. But are they obvious?

Did you start out as a believer in space exploration when you began working on the Mars miniseries?

Brian Grazer: As excited as everybody was, I sometimes start this unraveling at the rhetorical questions. I thought, Why should we care about going to Mars? It seems like an obvious question, but I really didn’t know the answer. I knew that anyone who's really progressive thinks about transported to space, but I didn’t know why we should go to Mars. I thought about it in the same way we did with the movie Apollo 13: How do we humanize the problem and make it cinematic? I brought that "obvious" question, that admission question, to the group and we began to assault it over and over again. The best way to answer it, we decided, was to do it in this form. We had experts and characters that could participate in what is going to be archival documentary footage or footage that is going to be created to deal with the cinematic part. I guess that’s what you were asking, and what Elon’s referring to: How do you get people to identify with the reason and adventure and purpose of this whole task? We thought that this approach, documentary and cinema, would do it. I see I struck a nerve with my flip use of "obvious." But it sounds like you are trying to persuade the public, not just to watch this series but to help realize the whole premise of the show. Is that right? Ron Howard: Yes, definitely. I became involved because I believe not just in going to Mars but in what the space program means to our country, to the world, to generations to come. Anything that supports that, romanticizes that in the world of today, and makes people believe it’s possible and begin to think of going into space as an imperative like I do, is a theme worth tackling I think. Brian Grazer: You write for Discover and think about these things much more that I do. I just dream about these things. I had to learn about it to even approach working on this project. I invested it with human emotion, and that’s the goal of a cinematic experience, but I didn’t know that much about space aviation. I had to learn on the go. It was exciting when I realized, Oh wow, that's why everybody wants to do it! So you believe there is a human destiny in space? Ron Howard: I believe that, yes. I think it would be tragic if we didn’t pursue it, and I think society benefits so much from that pursuit. I’m in that school of thought. There is another tricky balance in your series, between the thrill of exploration and the incredible danger. Between the desire and the fear. How did you attempt to strike the right tone there? Ron Howard: We began with the book How We'll Live on Mars. A lot of the problems and challenges people are going to face, the life-threatening circumstances that they’re going to have to navigate, are there in the book. Then we began interviewing everyone, from Neil deGrasse Tyson to Elon Musk and Andy Weir [author of The Martian]…we had 21 big thinkers from NASA, JPL, SpaceX, and other places. We began quickly developing the punch list of all the terrible things that could happen on Mars, and what some of the contingency plans would be to try to survive those crises. That’s the core of the drama that you see in the scripted portion of the series. Given those risks, if your son or daughter said "I want to go to Mars," how would you feel?Ron Howard: I would of course be anxious and terrified as a parent, but I’d also understand the very human passion to explore and to be on the absolute vanguard of discovery. There’s no doubt that the first mission to Mars will be the greatest adventure a human being has ever conducted.