On the anniversary of the first Moon landing 49 years ago, here are some stunning images you may have never seen 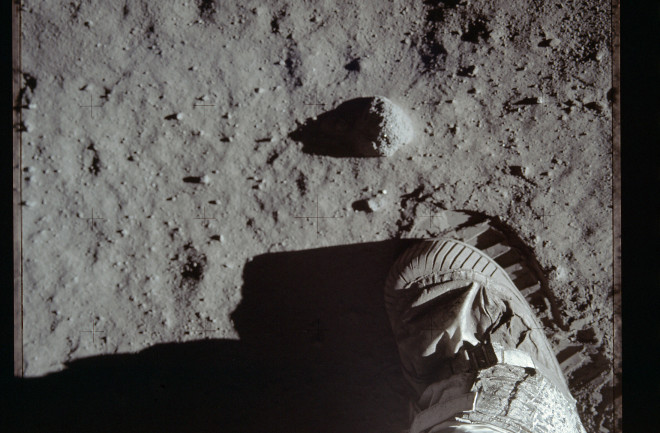 Man on the Moon — for the first time. July 20, 1969. (Source: NASA/Project Apollo Archive) It has been not quite a half-century since human beings stepped foot on another planetary body for the first time. Forty-nine years ago today, to be exact. It was on July 20, 1969 when Neil A. Armstrong, Commander of the Apollo 11 mission, descended the steps of the Lunar Module and upon reaching the surface uttered these instantly famous words: "That's one small step for a man, one giant leap for mankind." (Btw, if you think he didn't actually say "a man," thereby committing a grammatical faux pas, read this.) He was followed to the surface by the LEM pilot, Edwin E. "Buzz" Aldrin, Jr. Meanwhile, Michael Collins orbited overhead in the Command Module, to which Armstrong and Aldrin would later return for the ride home. I was 13 years old at the time, and I still have vivid memories of the live television broadcast of the first Moon walk. But even more memorable than that were the still images the Apollo 11 astronauts made while on the surface. And it is to those that I'm dedicating this anniversary post. While on the surface, the astronauts shot with the Hasselblad 500EL Data Camera with Reseau plate, fitted with a Zeiss Biogon 60mm ƒ/5.6 lens. The resulting images are mostly astonishingly sharp. And some are incredibly well known. But to commemorate the anniversary of the Apollo 11 landing, I wanted to put together a selection of mostly lesser known images. I wouldn't call the ones I'm including here outtakes. They're more like photos you shoot that don't make it into a photo album of some sort, but nonetheless still have great value.

One of the first human footprints on the Moon. Consider the image at the top of this post. It is not nearly as well known as the iconic "bootprint" photograph (right). Perhaps that's because there's something particularly compelling about a simple footprint, left behind for eternity on a planetary body more than 200,000 miles away. But I have to say I'm even more fascinated by the photo of a human being's booted foot after it has just pressed into the lunar soil. Also, not all of the photos are perfectly framed, and one is even blurry. But for me, their imperfections make them all the more exquisite. That's because they remind us that these heroic astronauts were incredibly vulnerable human beings who had a terribly short period of time — they spent only 21 hours and 36 minutes on the Moon's surface — to do an enormous amount of work in an environment that could kill them in an instant. Before we get to more of the images, I should first say that they come from Kipp Teague's incredible Project Apollo Archive. For the project, Teague made very high resolution scans of images provided by NASA, and then published them to Flickr. All of the images below come from there. The original images are extremely high resolution. I've reduced their size somewhat. But even so, I suggest that you click on each one and then click again to zoom in for some impressive detail. Lastly, for some of the images that follow, I've done some minor corrective processing. For example, for the image of the Lunar Module floating on its side, the scan rendered the blackness of space with a slight bluish cast. That was not natural, and it made it difficult to discern the spacecraft. I've removed the cast, and also reduced noise, resulting in an image that probably looks more like the scene did to Michael Collins, who took the photo from the Command Module as the Lunar Module was preparing to descend to the surface. Okay, here you go. Enjoy!

Neil Armstrong, Commander of Apollo 11, on the way to the Moon. Despite its blurriness — and maybe in part because of it — the photo manages to convey a fleeting, unguarded moment within the cramped confines of a spacecraft that is headed out into a hostile void. There's a hint of a smile, and maybe a bit of weariness in Armstrong's eye...

Looking back at Earth's dynamic atmosphere after launch of Apollo 11 on July 16, 1969. The swirling mass of clouds below are the remnants of Hurricane Bernice in the Pacific off the coast of Baja California.

Michael Collins, on the way to the Moon.

Buzz Aldrin in the Lunar Module while on the way to the Moon.

On orbit around the Moon.

The rugged lunar surface as seen from orbit.

A particularly high contrast image of the moon's surface as seen from orbit during Apollo 11. I find the patterns of light and dark almost akin to a work of abstract art.

Buzz Aldrin exits the Lunar Module just prior to climbing down the ladder to the surface.

A closeup photo of the plaque left behind on the moon by the Apollo 11 astronauts. Made of stainless steel, it measures nine by seven and five-eighths inches, and one-sixteenth inch thick. The plaque was attached to the ladder on the landing gear strut on the descent stage of the Apollo 11 Lunar Module.

Not quite a pale blue dot at this distance, Earth is seen in the sky above the Lunar Module.

The ride home. Last but not least, a more famous image:

Click twice to enlarge and look at the reflection in the helmet visor.