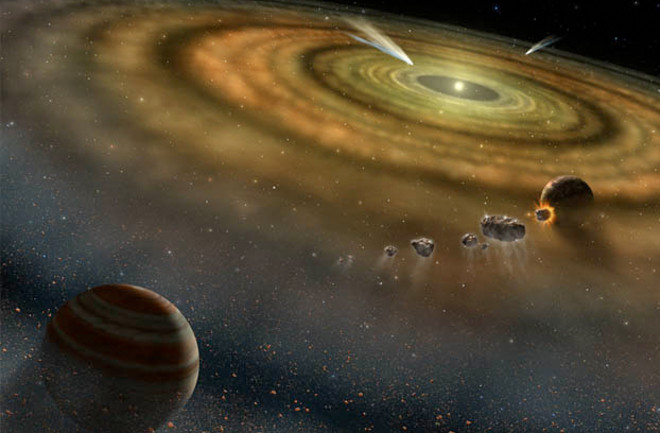 Artist's conception of the dust and gas disk surrounding the star Beta Pictoris. Credit: NASA/FUSE/Lynette Cook Slowly but surely, astronomers have been making huge strides in understanding planets around other stars. From just proving they existed about 20 years ago, we’re now at the point where they can determine the composition of an exoplanet, its weather patterns and — as of this week — even the length of its day. Researchers announced today that they've calculated the spin of gigantic planet β Pictoris b, about 63 light-years away. A day on the planet lasts just eight hours — confirmation of astronomers' current models that indicate that larger worlds should spin more quickly.

Scientists have known of the gas giant β Pictoris b for almost 6 years, and have been studying it ever since. It was one of the first exoplanets to be observed directly, meaning you can actually see it in pictures (as opposed to just seeing a host star dim when the planet passes in front). The world orbits the star β Pictoris, a bright young star, approximately every 21 years. Researchers had already managed to learn all this about the system. But using the ESO’s Very large Telescope to observe the light from β Pictoris b, they got precise enough data to figure out just how fast the exoplanet spun on its axis. They did this by using the Doppler effect, which shifts an object’s light spectrum depending on its velocity. Since half the planet was rotating towards us, its light was blueshifted, and the half rotating away from us was redshifted. That was enough for the researchers to calculate the exoplanet’s equatorial rotation rate of 25 km/s. Since they knew the world’s size, about 1.65 times as big as Jupiter, they could quickly calculate the eight-hour day. The details appear in this week’s edition ofNature.

Astronomers have learned the exoplanet β Pictoris b spins faster than any in the solar system, in line with the trend of bigger worlds rotating more quickly.

As it turns out, β Pictoris b’s spin rate puts it squarely in line with a trend established in our solar system: the bigger a planet is, the faster it spins. (This excludes Mercury and Venus, though, since the sun is so close by it interferes with their rotation.) Actually, for β Pictoris b to fit in perfectly with the trend, it should’ve been spinning about twice as fast, but the researchers chalk that up to its young age of only about 20 million years. When it’s closer to our 4.5 billion years, it should have cooled and shrunk, increasing its spin. This is actually a fairly significant development for scientists, in addition to being just conceptually neat. Knowing its spin rate will allow scientists to better model β Pictoris b’s weather systems and atmospheric dynamics. Plus, they should be able to apply this technique to figure out the same about lots of other exoplanets as well. This will help them better understand planetary dynamics in general, shedding light on just what determines a planet’s rotation rate to begin with, and learning a little something about how all planets formed.