Of Birds and Thumbs 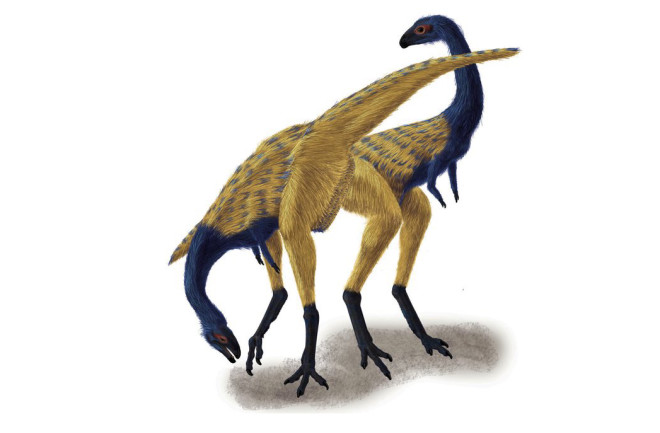 Meet Limusaurus. It is not — I repeat NOT — the missing link between anything. And yet it is still an important fossil that may help us understand how birds evolved from dinosaurs.

The recent splash about a certain fossil primate has revealed yet again just how much a lot of people (sadly, including a lot of journalists) want to cling to the notion that paleontologists are only interested in missing links--which, I guess, are supposed to be the direct ancestors of some living group of organisms that are precisely halfway between primitive forerunners and the advanced living creatures.

This notion is wrong in many ways. First of all, the entire body plan shared by, say, living birds did not leap into existence in a single ancestor. In fact, what we today consider the bird body plan actually evolved through a long series of steps. Different parts of bird anatomy evolved at different times. It's now generally agreed that birds descend from a group of dinosaurs called theropods that includes lots of famous two-legged species like T. rex and Velociraptor. Many studies show that feathers had already evolved in forms seen on birds today on dinosaurs long before they had wings, beaks, or lots of other adaptations that all birds today have. So looking for "the" missing link for birds is ridiculous from the get-go.

The obsession about missing links is wrong-headed for another reason. Paleontologists can learn a lot about the history of a living group of organisms without unbroken chain of direct ancestors (which is fortunate, because the fossil record is far too scrappy to ever uncover such a series). That's because the evolution of animals is, in many ways, like branches growing from a tree. So paleontologists can look at the branches of a related group of species and note which species have which traits.

There are some traits that all the species share, which were already in place in their common ancestor. And there are some traits that are only found among a smaller group of related species within the tree. Those are new traits that evolved later than the earlier traits. Scientists can then mark nodes along the tree to show how new traits evolved, and how old ones got modified into new ones. And as scientists discover new fossils, they can come up with more detailed hypotheses for the pattern of this change.

Limusaurus, which makes its debut in tomorrow's issue of Nature, sheds light on one particularly contentious matter about the origin of birds: how the fingers in a dinosaur hand got transformed into the end of a wing. A bird wing starts out as a limb bud, inside of which tiny clusters of cartilage cells start to form. Eventually, these clusters stretch out into wrist and finger bones, which later fuse together to provide a bendable spar that can support flight feathers. (To the left here is a simple diagram of the bones in a chicken's hand.)

Only three digits form in a bird limb bud. Many lineages of land vertebrates have lost one or more digits over the course of their evolution. But which digits did the birds lose?

Scientists have generally argued for one of two possibilities. One possibility is that the thumb and pinky were lost, as I'm illustrating with my own hand here. That's the pattern that has evolved in other land vertebrates, such as in horses. And when developmental biologists look at the clusters of cells that first develop in bird limb buds, they appear where the middle three digits appear in other land vertebrates. This alternative goes by the name 2-3-4. (Scientists name the five digits of the hand or foot starting from the thumb [1] and going out to the pinky [5].)

Yet a number of paleontologists have argued that the fingers in a bird's wing are actually 1-2-3, as I'm showing in my second self-portrait. In early birds, such as Archaeopteryx, the fingers were not yet fused. As a result, they can give a clearer look at the anatomical connections between the bones and how they compare to other land vertebrates. I've lined up Archeopteryx's three-fingered hand with the five-fingered hand of an alligator, the closest living relative of birds. That top white digit looks a lot more like a stout thumb than a slender index finger. More evidence offered in favor for the 1-2-3 hypothesis comes from how the digits of early birds and related dinosaurs make contact with wrist bones as digits 1, 2, and 3 do in other land vertebrates.

Last year scientists at Yale decided to investigate this intriguing paradox by investigating the genes that build bird wings. In all land vertebrates, the same set of genes help set the identities of the digits. They found that in both mammals and alligators, there's a key difference in the genes that are active in the thumb and in the four other digits. In the four other digits, a gene called HoxD-11 is active late in development. In the thumb, it's silent. That difference may be a crucial reason why thumbs are so different from other fingers.

But in birds, the scientists found, something odd happens. In digit 2 (corresponding to our index finger), HoxD-11 is silent. One way to interpret this result is as follows: birds really do have 2-3-4 hands. Their dinosaur ancestors lost their thumb and pinky. And they also evolved a shift in the pattern of gene activity in their hands, so that HoxD-11 stopped switching on in the index finger. As a result, it became thumbish.

Enter Limusaurus. This 1.7-meter-long dinosaur was recently discovered in China. It's interesting for a lot of reasons, such as the fact that it appears to be one of several examples of a carnivorous theropods giving up meat and becoming a plant-eater. (The simple feathery covering is inferred from discovery of feathers on other dinosaurs.) Limusaurus is also interesting for its hands, shown here. After carefully analyzing the different bones that make it up, Limusaurus's discoverers have concluded that it has digits 2,3, and 4--plus a tiny digit 1.

This vestigial thumb has only a single bone left, the metacarpal at its base. The scientists conclude that by the time Limusaurus evolved, some features of the bird hand had already evolved--namely, a lost pinky and a vestigial thumb. But the remaining fingers had not yet undergone further changes seen today in birds, such as the thumbiness of the index finger.

To see how the Limusaurus  hand fits into the overall hypothesis about bird evolution, you can take a look at the tree the authors publish in their paper, reproduced below. Limusaurus belongs to the branch marked Ceratosauria. All living birds belong to Neornithes at the top. It will take future fossil discoveries to put this hypothesis to the test. But it's already a fascinating synthesis, showing how an ordinary five-fingered hand evolved over millions of years into many new forms, including one three-fingered arrangement that you can see soaring overhead today.

Update: Co-author Jim Clark gets into some of the details of the research in his comment on my post. Thanks, Jim.