This month's two most intriguing events lurk in the shadows. 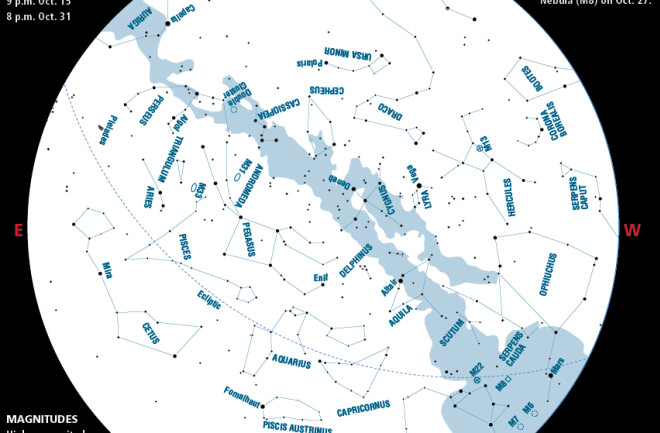 Skygazers are light-seekers. Regardless of whether you view bright planets, conspicuous constellations or splashy deep-sky objects, the things that interest us either radiate or reflect copious amounts of light.

That’s what makes October so unusual. This month’s two most intriguing events literally lurk in the shadows. On the morning of Oct. 8, the full moon passes deep into Earth’s shadow, and observers from eastern North America to East Asia can witness a total lunar eclipse. From North America, the partial phase begins at 5:15 a.m. EDT, while totality commences at 6:25 a.m. and lasts 59 minutes. During totality, the moon typically sports a reddish hue. As sunlight passes through Earth’s atmosphere, air molecules refract the light, scattering blue light more effectively than red, leaving red to fill our planet’s shadow.

The geometry reverses the afternoon of Oct. 23, when most North Americans will be standing in the moon’s shadow. During this partial solar eclipse, observers can watch our satellite block up to 81 percent of the sun’s disk. (The farther north you live, the more the moon covers.) To protect your eyes, make sure to view this eclipse only through a safe solar filter.