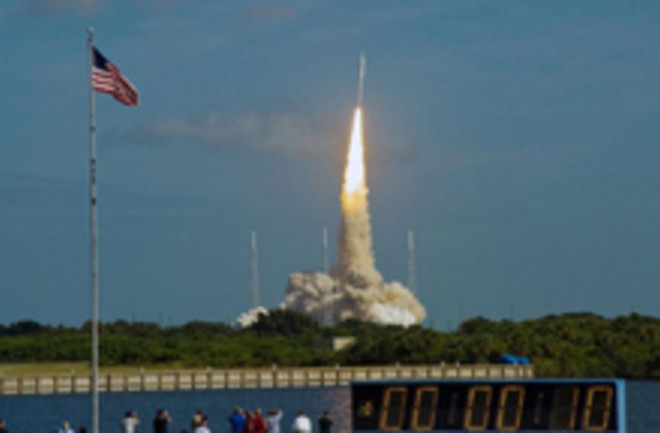 The Obama administration's new budget may come in at a hulking $3.8 trillion, but one thing it doesn't include is continued funding for the Constellation program. The program, which was intended to continue the work of the aging space shuttles, will get the ax if Congress approves the President's plan. This also means that NASA would abandon its goal of returning to the moon by 2020.

Obama's budget ends work on the shuttle follow-on vehicle, known as Orion, as well as a pair of rockets developed to fly astronauts to the space station, the moon and other destinations in the solar system. "We are proposing canceling the program, not delaying it," Peter Orszag, director of the Office of Management and Budget, told reporters [Reuters]

. The announcement had been some time in coming: The Augustine panel that Obama convened last year to review human spaceflight concluded that Constellation couldn't succeed without $3 billion in additional annual funding, and rumors broke out last week that the President's budget would kill the program for good. In place of the Constellation program's Ares rockets and Orion crew capsule, Obama's plan calls for funneling money to private companies that are jockeying for NASA contracts. The Washington Postreports that the plan would funnel $6 billion to support private space companies developing a vehicle to ferry astronauts back and forth from the International Space Station.

The plan would also extend the life of the space station until 2020. Commercial Spaceflight Federation president Bretton Alexander was understandably giddy at the prospect of private companies taking center stage.

"At a time when job creation is the top priority for our nation, a commercial crew programme will create more jobs per dollar because it leverages millions in private investment and taps the potential of systems that serve both government and private customers," he said [BBC News]

. However, the White House's plan to shift to private spaceflight has already ruffled plenty of feathers. Congressional representatives from states with many NASA jobs, like Florida and Texas, have promised to fight the move all the way. Michael Griffin, the previous NASA administrator who served under President George W. Bush, was even more bitter at seeing Obama cut his prized program:

"It means that essentially the U.S. has decided that they're not going to be a significant player in human space flight for the foreseeable future... One day it will be like commercial airline travel, just not yet. It's like 1920. Lindbergh hasn't flown the Atlantic, and they're trying to sell 747s to Pan Am" [Washington Post]

. Some space buffs are also mourning the loss of Constellation's ambitious goal of reaching the moon by the end of this decade. However, budget director Orszag insisted to reporters that the new plan doesn't close off the route to human exploration of the moon and the solar system's planets--it just pushes these efforts back to an unspecified date. Orszag claimed that

"advance robotics and other steps that will help to inspire Americans and not just return a man or a woman to the Moon but undertake the longer range research that could succeed in human spaceflight to Mars" [SPACE.com].

Lost in the furor over Constellation is the fact that Obama's budget actually increases NASA funding slightly. And as DISCOVER blogger Phil Plait points out at Bad Astronomy, private companies were on track to reach orbit faster than the Constellation program even before this proposed sea change in the government's approach to spaceflight. Even a fully-funded Constellation program would not have gone back to orbit until at least 2015, leaving a five-year gap after this year's pending space shuttle retirement with no way for Americans to reach orbit other than hitching a ride with the Russians. NASA had seen lots of infighting over whether Constellation, and especially its Ares rockets, were the right approach. Now it might have to accept losing them for good. Related Content: Bad Astronomy: Give Space a Chance Bad Astronomy: RUMOR: Obama to Axe Constellation And Ares 80beats: Liftoff! NASA's New Rocket Takes to the Sky In a Successful Test Flight 80beats: New NASA Rocket May Not Be “Useful,” White House Panel Says 80beats: Presidential Panel: Space Travel Plans Are Broken DISCOVER: Space Boost, on the potential of private spaceflight Image: NASA