Applications of new tiling pattern go beyond the bathroom floor. 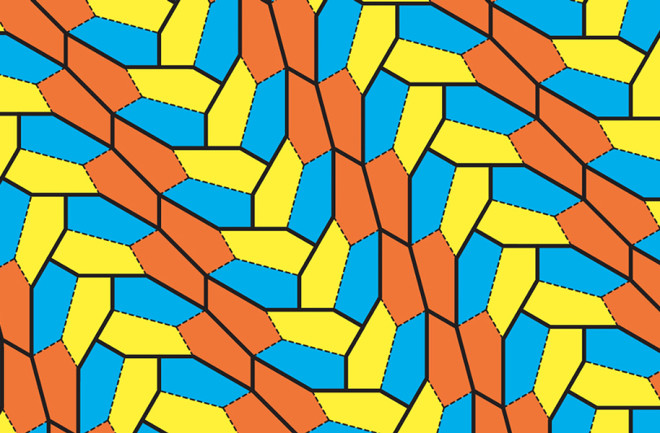 A newly discovered type of pentagon can cover a plane perfectly. | Casey Mann

Here’s a puzzle for you: Take a bunch of pentagons and try to fit them together so that they cover a tabletop perfectly, with no gaps or overlaps. If you try it with ordinary pentagons, with equal sides, you’ll soon see it just won’t work. But loosen the requirements by allowing unequal sides, and all becomes possible. Mathematicians had found 14 different types of pentagons that worked, but for 30 years, no one could find another.

In August, mathematicians Casey Mann, Jennifer McLoud-Mann and David Von Derau of the University of Washington in Bothell discovered a 15th. They developed a clever computer algorithm to sort through all the possible configurations to find one that fit.

The new pattern is certain to inspire fresh mathematical art, but additionally, tiling problems like this connect richly to other areas of mathematics. Not only does the new pentagon give bathroom floor decorators new possibilities, scientists could create a new material with novel properties that use this pattern at a molecular level.

[This article originally appeared in print as "Pentagon Puzzler."]