Newly Analyzed Star is One of Ten Largest Ever Discovered 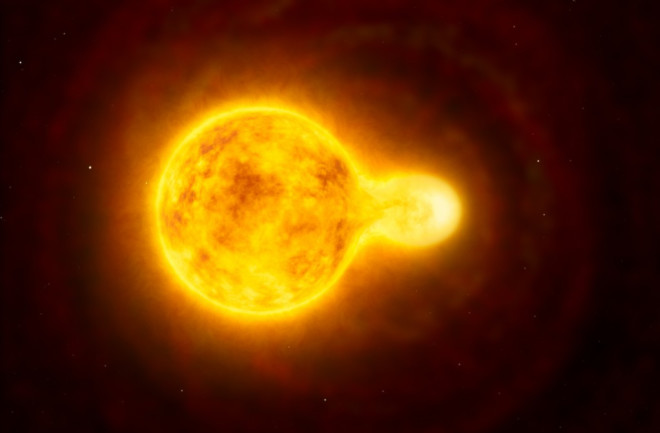 Yellow hypergiant star HR 5171A and its companion are so close they actually touch, as in this illustration. Credit: ESO You might think that with all the crazy phenomena in space — black holes and rogue planets and expanding space-time — at least the humble star might be something we fully comprehend. But you’d be wrong. A star is about as simple to understand as a cell; sure we know a lot, but there’s so many stars, and so many varieties, that we might never know it all. And that’s exactly the case with a star we've known of for years, a yellow hypergiant called HR 5171A. New analysis indicates that this star is the largest of its type yet found — and one of the ten largest stars known. Studying it has shed new light on how these rare giants behave.

Though it conjures images of an enormous Homer Simpson after too much sugar, a yellow hypergiant is just another kind of star, like our sun or a red giant or a white dwarf. What makes yellow hypergiants special — other than their enormous size and their pale-yellowish color — is their rarity. We only know of 14 such stars in our galaxy, and they’re likely a brief phase that huge stars pass through during their lifetimes.

HR5171A is about 12,000 light-years away, but it's so huge and bright that it's visible to the naked eye (it's just below the center in this image). Credit: ESO/Digitized Sky Survey 2 And HR 5171A (here’s its stats, for you observationists out there) is particularly hypergigantic. As an upcoming paper in Astronomy & Astrophysics details, the star is about 1300 times as wide as the Sun, or around 12 times the average Earth-sun distance. That’s big enough to put it among the top ten largest stars we know about. It’s also about a million times brighter than our sun. HR 5171A lies about 12,000 light-years away, in the constellation of Centaurus, but it’s bright enough that you could still spot it with the naked eye under ideal conditions.

Lives of the Stars

But perhaps the wildest thing about this star is its companion star. This smaller sun orbits HR 5171A every 1300 days or so, and their surface temperatures are both around 5000 K. And, oh by the way, the companion is so close that the stars are actually touching. The press release even quotes the lead author as saying, “The whole system resembles a gigantic peanut.” Quite the mental image. And the research team didn’t just rely on current observations for insights into this system. They also examined over six decades’ worth of data to determine that HR 5171A has grown larger and cooler over the past 40 years, suggesting it will soon transition to another kind of star (a blue variable or Wolf-Rayet, for example). They were lucky to capture it during this brief point in its evolution. Learning more about this temporary class of star should help astronomers not just understand the life cycles of the biggest stars, but also how all stars change and interact with companions. Just one more step on the road to finally knowing all there is to know about stars.