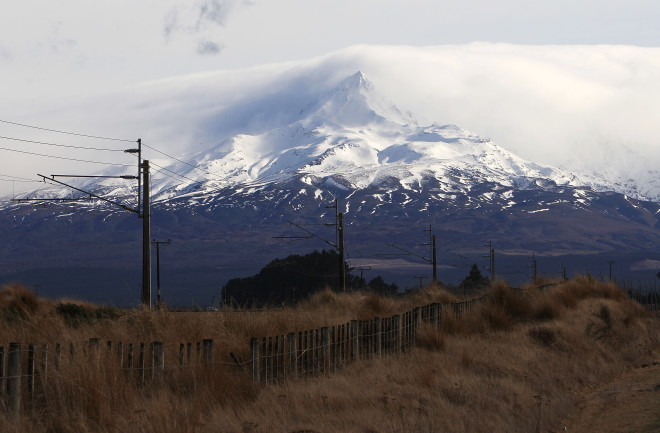 Hagen Hopkins/Getty ImagesRuapehu, on the north island of New Zealand, is one of the most restless volcanoes in the island country. However, it has been a quiet (almost) decade for the picturesque volcano. The last confirmed eruption from Ruapehu was back in 2007, and it was a very small explosive eruption. You have to go back over 20 years to get to its last major eruption. Those eruptions, in 1995 and 1996, have had a lasting impact in how Ruapehu is watched ... that is, very closely. You see, Ruapehu isn't just a nice place to hike. The edifice is covered with ski areas and chairlifts! Yes, an active volcano is littered with ski trails on both sides (see above)---the Turoa, Whakapapa and Tukino ski fields and hiking huts go all the away up to the summit. So, closely monitoring Ruapehu is vital for keeping people safe. They also have a volcanic hazard map to keep people aware of the risk of skiing on an active volcano.

Ruapehu (left) and Tongariro(right) in New Zealand, seen from the International Space Station in 2013. The summit crater lake (light blue) on Ruapehu is clear in this shot.

NASA Earth Observatory Beyond the threat of an eruption, there is the risk of volcanic mudflows (lahars) that stem from the volcano having both an abundance of ice and snow and a crater lake at the top (see above). Any small explosion could melt that ice/snow or breach the lake to send lahars down the sides of the volcano---as has happened numerous times over the past few centuries, including 1953 when a lahar destroyed a bridge and train, killing over 150 people. GNS Science watches the seismic activity with webicorders at the volcano, along with webcams pointed at its summit. They also observe and sample the water from the crater lake, keeping track of its temperature and composition. This is all to see if new magma is releasing gases and imparting heat into the crater lake---both of which could be early signs of a new eruption.

Longterm Ruapehu crater lake temperature readings, showing the cycle of heating and cooling. This graph was made in August 2016, when the lake was headed towards record low temperatures.Brad Scott / GNS Science / GeoNET Now, the crater lake at Ruapehu had been heating up over the first half of 2016, but then it started to cool back down again. This a common pattern at Ruapehu (see below), as the activity at the volcano waxes and wanes. In fact, the temperature at the crater lake at reached record low readings during August, getting down to 12ºC (54ºF), down from temperatures as high at 46ºC (117ºF) earlier in the year (note: the record high is 60ºC/140ºF in 1968). Things seemed pretty calm at the New Zealand volcano.

Crater lake temperatures at Ruapehu in New Zealand over the past few months.Brad Scott / GNS Science / GeoNET Now, it has all turned around. Since September 2, the temperature in the lake has risen ~4ºC (~7.2ºF) and is still climbing (see above). This could be the result of either new magma entering the system or merely just readjusting of the hydrothermal system in Ruapehu (although exactly what controls the pattern is not clear). The temperature is a long way from that 2016 peak of 46ºC, but does show a change in the conditions at the volcano. Add elevated volcanic tremor since the heating began, and you have a volcano that is definitely worth watching. GNS Science has not changed the alert status at Ruapehu at this point. You'd need more heating and likely increased in seismicity at the volcano before they would raise it from its current Alert Level 1/Green. However, even when a volcano is in a decade long slumber, things are happening.