An animation shows Asteroid 2014 AA as it streaked across the sky on Jan. 1, 2014. (Source: CSS/LPL/UA) Deep Impact or Armageddon it certainly wasn't. Not even close. But Asteroid 2014 did put on a nice little show for astronomers as it streaked through space toward its demise over the Atlantic Ocean on New Years Day. That's it in the animated GIF above — a chunk of rock about six to nine feet across zipping across the starry background. Asteroid 2014 AA was discovered by the NASA-sponsored Catalina Sky Survey, which operates near Tucson, Arizona. According to NASA, it entered our atmosphere late on Jan. 1 and likely broke up. 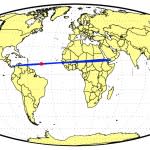 Source: NASA/JPL-Caltech Based on the Catalina Sky Survey observations, a scientist with the Jet Propulsion Laboratory determined that the asteroid probably exploded in the atmosphere somewhere along the blue line in the map at right. (Click on it for a larger version.) The red dot indicates the likeliest spot, determined by analysis of low frequency sounds detected by observation sites of the Comprehensive Nuclear-Test-Ban Treaty Organization. Luckily, Bruce Willis was not needed to try to save the day. This time.