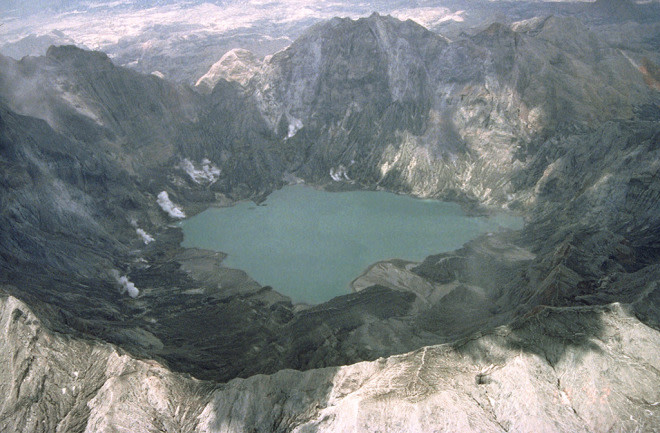 The crater of Pinatubo, seen in May 1992, almost a year after the eruption. Photo by USGS (Willie Scott) / Wikimedia Commons. You would think it might be hard to hide a volcano. However, the amazing power of surface processes to recover from volcanic eruptions means that the evidence of even large eruptions can be covered or scoured in a matter of decades to centuries. What was once a barren landscape after a large eruption is now covered in new vegetation, lakes and more. Just check out Pinatubo in the Philippines. Right after the eruption, the new crater left by the eruption was a grey wasteland, where hundreds of meters of ash filled river valleys and covered every surface of the area (see above). It's hard to imagine that anyone would be able to visit this steaming, desolate landscape anytime in our lifetime. However, nature had other plans. Only 24 years after that devastating eruption (the second largest of the 20th century), the lake in the crater of Pinatubo is a vacation spot (see below), where plants cover the ashy slopes and you can rent a kayak. Less than a quarter of century has already removed a lot of the evidence that a massive eruption took place.

Pinatubo: the recovery of the 1991 crater means that what was a volcanic wasteland is now a vacation spot. Photo by Andrew and Annemarie / Flickr. Now, expand that to maybe 30,000 years since the last eruption. In a climate with abundant rain and vegetation, the remains of a volcano can be almost entirely obscured or removed, so identifying these old volcanic vents can be a real mystery. Some volcanoes have very long periods of time between eruptions (the repose time), so they might never show any signs of activity like earthquakes or deformation, meaning that those remnants might only look like hills in a mountain range rather than a potentially active volcano. As a volcanologist, you need to look for things like pumice deposits, remains of crater walls, old lava flows and carefully map their orientation and thickness to see if you can trace these deposits back to a single source. Then, you might find that you have identified a volcano that no one has ever noticed. This is what happened in central Colombia. Careful geologic sleuthing by Servicio Geológico de Colombia (SGC) geologists Maria Luisa Monsalve with Ivan Dario Ortiz, Gianluca Norini, Jesús Rueda and Gina Bernardo Rodríguez. has announced that a series of hills in the northeast part of the Caldas province is really a volcano which they have dubbed El Escondido. The volcano itself is a pyroclastic ring (explosive debris) about 2-km across that forms the crater with lava domes filling (see below) in part of the volcano's crater. There isn't a lot known about its full volcanic history, but the SGC has identified at least one pumice fall deposit that is 8 meters thick near the crater. The SGC notes that the area around the newly-identified volcano has hot springs, which betrays the fact that heat from cooling magma still exists under the surface, but when the last eruption of El Escondido occurred is still not known.

Part of the crater rim and lava domes from El Escondido in Colombia. Image by SGC / OVS Manizales The overall character of the deposits and the shape of El Escodido is very similar to another volcano in central Colombia: Machín. These volcanoes don't look like the textbook volcano - they lack the perfectly conical shape associated with volcanoes like Mayon. However, these dome complexes can pack quite the punch when they do erupt. An example of this might be Chaitén in Chile, where a dome complex that hadn't been active for thousands of years roared back to life in 2008. Chaitén was so much of an unknown volcano that the SERNAGEOMIN wasn't even monitoring it as much of the volcano was heavily vegetated. At the time, it was thought that Chaitén hadn't erupted in over 9,000 years, but new mapping and dating around the volcano found that it has produced numerous explosive eruptions over the last few millennia. There is no immediate danger for people who live around El Escondido in Colombia -- there are no signs that it is coming back to life right now. However, it does mean that they need to be aware of the warning signs of an eruption, like an increase in earthquakes or new gas emissions from the hot springs around the volcano. Once more is known about its past, we will have a better sense of just how hazardous its eruptions are. At this point, it is exciting to find these surprise volcanoes that are hiding in plain sight, obscured by the other geologic processes that help the land recover after massive eruptions.