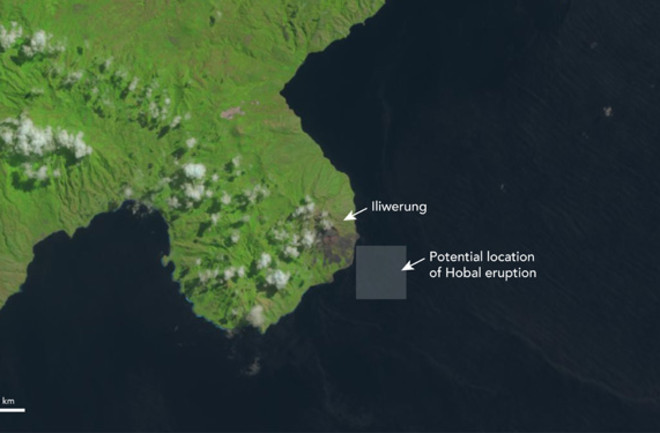 Landsat 8 OLI image of Iliwerung in Indonesia on Lembata Island, seen on August 12, 2013. The dark grey area is the volcanic complex, while the grey box marks where the new submarine eruption from the Hobal vent is likely occurring. Image: USGS/NASA.Interesting news coming out the of the East Nusa Tenggara Province in Indonesia. An undersea volcano off of the southern coast of Lembata unexpectedly erupted over the last few days, producing strongly discolored waters and a plume (likely made dominantly of steam) that reached 2 km (6,500 feet). The latest GVP Weekly Volcanic Activity Report also mentions incandescence noted at the sea's surface. According to news reports, the volcano is called "Mt. Hobalt", however, in the Global Volcanism Program's database, no such volcano exist. There is a Hobal that is part of the larger Iliwerung complex in the right area of Lembata, so this seems to be the volcano that is erupting. This volcanic complex has been producing diffuse fumarolic activity since the beginning of the month and the PVMBG noted that seismicity has increased sharply in this area as well. This new eruption from Hobal has prompted the PVBMG (Center for Vulcanology and Geological Disaster Mitigation) to put Hobalt on a Level II alert and warned fishermen and tourists to avoid the area. There have been some fears that this activity near the coast could produce a tsunami, but so far those fears are unfounded. This would be the first eruption from Iliwerung since 1999 and much of the eruptive activity at Iliwerung has been from Hobal since 1973. The last known subaerial eruption from Iliwerung was in 1948 (but records can be incomplete across Indonesia). Meanwhile, the continued eruptions at Rokatenda has caused a larger-scale evacuation of the region around the volcano. Seven hundred housing units are to be constructed for people who have had to leave their homes since October 2012 due to the ongoing activity. Recently at least 6 people died from a pyroclastic flow that swept across a beach where villagers were living on the island volcano.