InVADER will explore deep-sea vents on Earth to prepare future missions to do the same on watery worlds in the solar system like Europa or Enceladus. 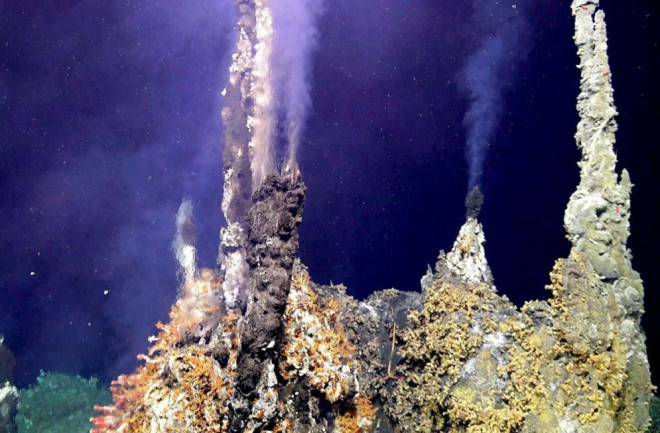 Some of the most intriguing possibilities for finding life outside Earth are on water worlds like Europa or Enceladus — ocean moons orbiting Jupiter and Saturn. However, those worlds are encased in layers of ice, meaning any ocean exploration will take place far beneath the surface.

But on our own planet, these deep-sea zones teem most reliably with life. That life is most often found near hydrothermal vents. These cracks in the seafloor release heat and chemicals that fuel intense biozones far from any sunlight.

Now, the Search for Extraterrestrial Intelligence (SETI) has received a NASA grant to fund a new project called In-situ Vent Analysis Divebot for Exobiology Research (InVADER). It will explore deep-sea vents on Earth in preparation for the day that scientists can send a similar craft out into the solar system to explore alien oceans and their own hydrothermal vents.

InVADER aims to explore a hydrothermal vent area called Axial Seamount. This is an active volcano a mile underneath the surface, and the biggest one on the western edge of the Juan de Fuca tectonic plate. InVADER will have three major goals during its mission. The first is to produce actual science near Axial Seamount, to better understand the geology, chemistry, and biology around the vent system. By better understanding deep-sea vents on Earth, scientists hope they’ll be more prepared to understand whatever they find when deep-sea missions to other planets become a reality.

The second goal is to practice their science operations, testing different ways to answer the science questions they want to explore. They’re prepared to use lasers to analyze the different materials they encounter, as well as experiment with different strategies for collecting and analyzing data. That can be tricky when your instrumentation is a mile underwater, much less hundreds of millions of miles away, as it would be on Enceladus or Europa. InVADER can also take pictures and even provide 3-D mapping of its environment so researchers can better understand the other readings the underwater robot sends back.

The last goal is a technology demonstration. The team wants to prove that InVADER can actually perform in its deep-sea environment, both in terms of on-site science, and in its ability to gather samples and bring them back to the lab.

InVADER will remain at its underwater research site for a full year, taking daily measurements and eventually returning with samples from the rocks and water it collects.

While InVADER will remain safely on Earth, the lessons it learns from Earth’s own underwater vents will prepare researchers for the eventual trip to the oceans of watery moons that planetary scientists and astrobiologists alike are keen to explore.